ALL newspaper and website editors will take any excuse to run a picture of naked people, according to a new sex survey.

A poll of sexual attitudes among the nation’s media executives found that 100% of them were open to any and all flimsy excuses to show images of nudity.

Newspaper editor Julian Cook said: “I’m desperate to show boobs in a semi-legitimate news context. Usually this comes in the form of a new ‘sex survey’ like this one.

“This means I can print a ‘sex’ stock photo that was clearly taken in the 90s because the man is wearing loads of hair gel.

Pulled pork 'does not make you more manly' 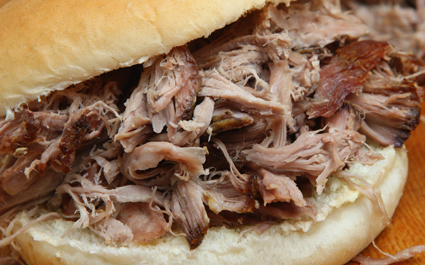 FASHIONABLE meat meals like pulled pork, steaks and ‘barbecue’ do not confer manly qualities, it has emerged.

It had been thought that the large, oozing meat dishes consumed in restaurants with exposed brickwork and quasi-American names were making men stronger, braver and more capable in battle.

Professor Henry Brubaker of the Institute for Studies said: “We took a group of men, fed them nothing but pulled pork and 28-day-hung rib-eye steaks for a month, then dropped them on the Orkneys with just pocket knives to see if they would survive.

“Their meat diets extended their lifespans slightly by giving them an extra layer of subcutaneous body fat. But the main problem was having to get their own food rather than simply ordering it from an oversized laminated menu with pictures of cows on it.”

38-year-old graphic designer Stephen Malley said: “After a gruelling day at my moderately demanding desk job, I love to ‘chow down’ on a massive burger covered in cheese and bits of pork. Like a lumberjack from the Deep South of America, or whatever.

“Then I go home and have half a dozen Gaviscon before bed, otherwise I won’t be able to sleep.”