THE success of Bavarian-style Christmas markets is due to a phenomenon that makes crud desirable when placed in a rustic-looking shed.

Psychologist Tom Booker has been investigating the ‘shed effect’ since he visited a Christmas market last year and inexplicably purchased some salad tongs made from old sticks.

Booker experimented by placing worthless items inside a shed, at which point they seemed to magically acquire value.

The crud became more desirable still as the shed was decorated with fairy-lights and fake snow.

Booker explained: The turning point came when I put a urinal cube in the shed, and my assistant offered me £30 for it.  It defied any rational explanation.

He believes the effect may also explain the popularity of mulled wine: Why else would you voluntarily drink what is basically a scalding hot Glade Plug-In?

Meanwhile, sheds have been vanishing from gardens all over the country as unscrupulous traders cash in on the effect.

Roy Hobbs from Croydon tracked down his stolen shed to a Christmas Fair on Londons South Bank:  I went down there to ask for it back, but ended up buying a novelty clock for my wife and some toys made of wood for the kids.

The worst part is, without my shed Ive got nowhere to hide from them.

Falling over 'nothing to be ashamed of' 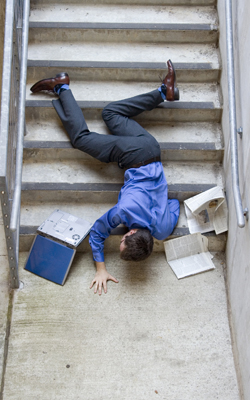 PEOPLE who fall over often feel a deep sense of humiliation, it has been claimed.

As ice envelopes the UK there has been a 92% increase in people falling flat on their arses, with many being either deliberately ignored by onlookers or openly mocked.

Professor Henry Brubaker said: “Falling over can be physically painful, but it’s your pride that really takes a beating.

“You can try to laugh it off but that always looks a bit forced. Behind the smile there is despair.”

Professor Brubaker fell over in 2011 at a conference centre, bruising his arm.

“It had a polished floor, there were no grips on my shoes and I went down like a sack of shit.

“Everyone laughed, in fact someone actually said, ‘Have a nice trip mate.’

“All I wanted was a helping hand,  a few kind words and perhaps a boiled sweet. Instead I was made to feel like a pariah dog.”

Falling-over charity Falling Up is working to increase empathy towards people who lose their footing.

A spokesperson for the charity: “We’ve made a short film of celebrities falling over, you see George Clooney slip on a discarded burger box. He drops like a shot buffalo, smashing his chin on the edge of a bin.

“The message is the falling over can affect any of us, at any time, and it doesn’t mean you’re a dick.”