Should Britain's Ethnic Minorities Have Their Own TV Dance Contests?

THERE were renewed calls last night for Britain's ethnic minorities to have their own celebrity dancing competitions.

As Strictly Come Dancing became immersed in its latest ethnic conflict, fans of the show said it was yet more evidence that the races will never successfully integrate, either in ballroom or Latin.

Margaret Gerving, a Strictly viewer from Guildford, said: "There were never any rows in the original series of Come Dancing.

"I'm not saying it was perfect but everyone got along, there was less crime and you did not see long queues of indigenous British dancers at the employment exchange."

She added: "I've got nothing against the coloured people but they do not dance the same way as us. They dance in a messy, smelly way and their food tastes awful.

"Let them have their own dancing competitions. In their own countries."

Mohammed Iqbal, chairman of the British Association of Muslim Ballroom Dancers, called for segregated state schools so that young Asians could learn the foxtrot in accordance with the Koran, while understanding the moral degeneracy of Western dance steps.

He added: "Young muslim men need to retain their distinctive ballroom identity, while young muslim women should learn how to dance while wearing a floor length hessian sack and doing the dishes."

Meanwhile commentator Peter Hitchens, writing in the Mail on Sunday said: "Once again we are confronted with the catastrophic failure of the soft-headed multi-culturalism that began in the 1960s, that era of trendy, irresponsible dance-based policy making.

"But will the BBC finally have the guts to tell immigrant dancers to change their name and paint themselves beige? Don't count on it." 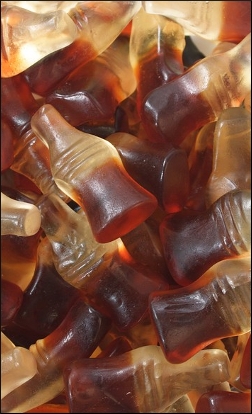 SOME of Britain's most violent crimes have been caused by Chewits, according to a new study.

Former cage fighter Bill McKay shot four people and clubbed a cashier with a shovel during a bank raid he claims was brought on by half a packet of Chewits and a Wham bar.

McKay, who has 49 previous convictions, said: "I'm a lovely bloke until I have an orange one and then I'm not.

"I used to like Opal Fruits. They made me do murders. Refreshers usually result in GBH, while I'm more likely to steal a car after a handful of midget gems."

Professor Henry Brubaker, of the Institute for Studies said: "The makers of Chewits gave the misleading impression that the sweets had a calming influence on rampaging, Godzilla-like dinosaurs. We now know the opposite to be true."

Meanwhile sweet manufacturers have been under increasing pressure since members of a notorious Manchester 'firm' described how they like to eat cola bottles and Black Jacks before each violent crime spree.

One gang member known as MC Skully G said: "The cola bottles give you the edge, you get the sugary rush but you also feel dark and moody and ready to murk someone.

"Black Jacks make you immune to pain, maybe because you have to concentrate pretty hard on chewing them. And they're also absolute fuckers to get the paper off."

The makers of Black Jacks, International Chemicals and Medical Waste Disposal Incorporated, denied that the sweet's controversial price increase from 1p to 2p came in response to police pressure to make them less accessible.

A spokesman said: "We simply undertook a detailed survey of Black Jacks consumers, who confirmed that they would be prepared to pay an extra 1p per sweet if it meant we could continue to use the same high quality mysterious ingredients."