SHOWING initiative is a waste of time for the person who does it and those who have to live with the consequences.

Researchers found that in 96 percent of cases, someone doing something without being asked results in something that did not have to be done being done badly.

Workplace initiative was found to be particularly pointless and counterproductive, as well as generating team meetings, group emails and lifelong, seething hatred.

Professor Henry Brusker, of the Institute for Studies, said: “Those who show the initiative are ultimately those most damaged by it.

“The initial buzz is soon replaced by emptiness, thwarted ambition and not being invited for drinks.”

He added: “The Road of Keenness leads to the Palace of Disappointment.” 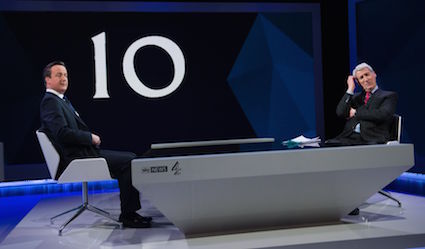 JEREMY Paxman drew dozens of crude sketches of what he would do to David Cameron and Ed Miliband during last night’s TV interviews.

The doodles, which the interviewer scribbled while not listening to the party leaders’ pointless answers, have been hailed by critics as a ‘thrilling parade of cruelty’.

“The number of blows matches the number of times Cameron says that ‘some people choose zero-hours contracts’. So eight.

“But as Cameron moves onto the economy Paxman brings out the toys – a steamroller, a pair of angry Jack Russells and a toilet stuffed with explosives.”

She added: “The sketches of Miliband are less visceral. He is portrayed as an isolated figure about to fall down a hole or be attacked by a large bird.

“They capture the pathetic nature of the subject while preserving the artist’s cool detachment to his many terrible fates.”