Six spooky stories that are bollocks when you think about them

GET in the mood for Halloween with these spine-chilling tales. Just don’t think about them too deeply or you’ll realise they’re bollocks.

Whenever she’s seen, a death occurs. And that’s true. However there are thousands of grey, white and black ghost ladies in the UK – even the smallest villages have one – so we should be more worried about daily Grey Lady fatalities than Covid deaths.

The killer in the backseat

A female motorist is pursued by a car or lorry at night. After escaping, it turns out the driver was trying to warn her about a killer in her backseat! Problem: did the woman not once look behind her? A grown adult can’t really hide in the back of a car. She deserves a knife through the shoulder blades for being such an unobservant cow.

The ghost who lures people to their death

Often a spectral boatman who draws people into marshes with a lamp where they drown. Precisely what satisfaction he gets from offing innocent strangers from a different century night after night isn’t clear. Perhaps you just turn into a time-wasting arsehole after you die.

Slenderman is spooky because much is left to your imagination. However he features on the user-written horror site Creepypasta, where the scariest thing is dumbass American teenagers’ appalling grammar, spelling and inability to describe anything without using cliches.

It’s a nun/highwayman/noblewoman who was bricked up behind a wall/cruelly betrayed/had a doomed love affair, and now they wander the earth/seek revenge/cause footsteps in old buildings. People who make up ghost stories should show a bit of originality now and then, eg. a ghost who moves with the times and kills people with a power drill.

Someone asleep in bed is visited by their grandma strangely late at night. The next day they assume it was a dream until their mother comes in, crying. GRANDMA DIED AT 2AM. Well we’ve never heard anything like this before! /sarcasm. She had to die sometime anyway.

The sickeningly embarrassing first records you ever bought 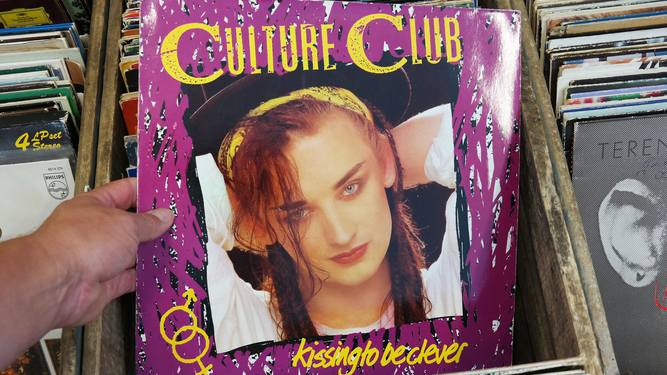 IF the first record you bought was the Undertones you still probably show off about it. But it wasn’t. It was one of these horrors you prefer to keep quiet about.

Living Doll by Cliff Richard and The Young Ones

Mostly the Young Ones arsing about over Cliff’s incredibly dated hit, so neither listenable nor comedy gold. What’s embarrassing is that you thought it was utterly hilarious. Pity your poor parents as you played it for the 12th time while laughing like a madman.

Take My Breath Away, by Berlin

Not truly awful, but film soundtracks are for deeply unadventurous people who aren’t into music and like to know exactly what they’re getting, like only eating at McDonalds. That was you.

Run to the Hills by Iron Maiden

The most juvenile band ever, with their weirdly pretentious lyrics and boring riffing. Even more embarrassing if you thought your C&A denim jacket made you a dangerous rock rebel as you prowled the mean streets of Knutsford.

Something naff by Queen

Which is plenty to choose from. ‘Fat Bottomed Girls’, ‘I Want to Break Free’, ‘One Vision’ – actually all of them. Queen were unique, but only because other bands didn’t produce a confusing mix of camp cod-opera, novelty songs and ‘serious’ rock about the machines taking over.

Freddie again, here sounding as if he’s being strangled as he tries to match a professional opera singer. You don’t like opera, so why did you buy this? You have no idea, except it was on the telly, you sheep.

Again, for people who feel they should own music but can’t be bothered to explore it. At least no one can accuse you of being a trendy fashion victim if you’re rocking out to All Creatures Great and Small.

Mull of Kintyre by Paul McCartney

Sentimental dirge with shite lyrics: ‘Far have I travelled and much have I seen’ etc. An unpleasant reminder that as a child you had no musical taste but relentlessly pestered your parents to buy you all sorts of rubbish.