Six things to buy and never use

Want to make yourself feel better through mindless consumerism? Here are some items to purchase and forget:

Initially exciting, electric toothbrushes quickly become irritating due to lengthy charging times, always trying to link to your phone via Bluetooth propensity for falling down the side of the sink. Stick it in the bathroom cupboard with the scales you’ve not consulted since lockdown began.

Recording all your innermost thoughts and worries in a beautiful handmade journal seems like a useful, reflective thing to do. Until you remember that you’ve already got Facebook for this and a journal won’t enable 62 acquaintances to reply to your narcissistic outpourings with ‘U ok hun?’

A heated ice-cream scoop solves what is probably the world’s smallest problem. Anyway, the truth is you’re going to eat 90 per cent of the ice cream from the tub at 3am, when you’re so pissed you’ll scoop it out with your debit card rather than be arsed to search the kitchen for this ridiculous implement.

You live in Swindon, your weekends are already taken up with hangovers, kids, sport on telly or all three, and, anyway, you don’t have a roof rack. The ultimate white elephant for any suburban garage, a paddleboard will be an annoying item you trip over for three years before eventually putting it in a neighbour’s skip in the middle of the night.

Purchased in the January sales after a particularly heavy New Year’s Eve, the spiraliser was going to help you become the healthy, wholesome person you know you really are. After one fiddly, annoying dinner, it went straight into the cupboard with the bread maker where it will stay until you die from eating ready meals. 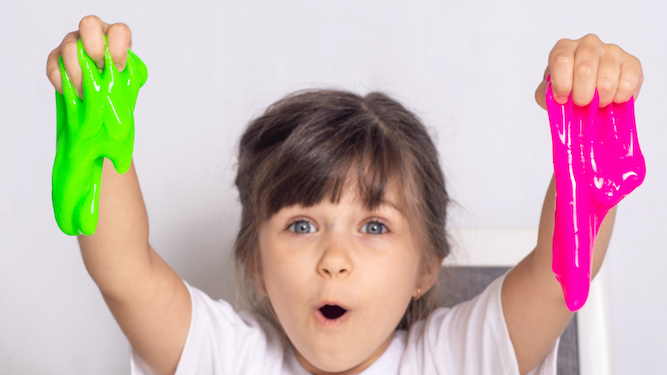 DO you want to make money without having anything of actual merit to sell? Try flogging these toys to gullible kids:

Kids will get excited about any old shit when packaged in a lurid plastic egg covered in sparkly shink-wrapping and, crucially, they don’t know what it is. Encourage gambling and demand by getting kids to make YouTube videos excitedly ‘unboxing’ them, in a vicious circle from hell.

Something shit and old, repackaged

Remember bath salts, those bog-standard crystals your granny used to swear by? Buy them in bulk, repackage them as ‘Magic Fairy Crystals’ and charge £3 per tiny pack emblazoned with a Disney character’s face. You’ll rake it in until the copyright infringement lawyers come knocking.

Slime is cheap to make and kids literally beg for it. Parents hate it because it sucks up dirt, lint, crumbs and pet hair with the intensity of a black hole and then transfers it all over the house. The kids will win because they have the immense consumer power of throwing a tantrum in Sainsbury’s.

It can be disgusting in every conceivable respect, but if a cuddly toy has eyes so big that, if real, it could see 40 miles in the pitch dark, children will immediately fall in love with it. It doesn’t matter that such a creature would be anatomically impossible. They don’t care.

Mind-numbingly basic ‘make your own’ kit

Chuck a few felt tips and a large pebble in a box and sell it as a ‘Make Your Own Pet Rock’ kit. After all, it’s not just kids that are stupid: parents will shell out for any old shit if it will allow them to have a pee and a scroll through their phone in peace once in a while.