A STAIR gate has proved to be a successful barrier to a baby, a pet dog and a grandmother.

Tom Logan installed the gates at the top and bottom of the stairs to protect his one year-old daughter and prevent his young labrador from getting upstairs, but they have also managed to trap his 62-year-old mother-in-law Mary Fisher.

Logan said: “Mary popped round so I said I’d stick the kettle on while she went to the loo. When I came back a few minutes later I saw she had got her foot stuck while trying to climb over the gate.

“She was clinging onto the banister in a rather haphazard fashion while asking me about my job.

“I asked her why she didn’t just ask me how to open it and she said she ‘didn’t like to make a fuss’. We’re going to put that on her headstone.”

Logan added: “When I went back to the kitchen I suddenly remembered the other gate at the top of the stairs. She had managed to get one leg over and was leaning forward while gripping onto the top of it. She looked like she was on a racehorse.”

Mrs Fisher said: “I don’t like to make a fuss.” 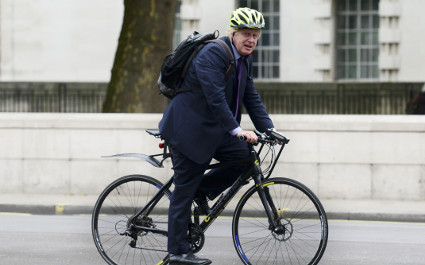 BORIS Johnson has baffled scientists by cycling every day but never looking any different.

Research by the Institute for Studies on the ruddy-cheeked politician has confirmed that exercise must be a load of pointless nonsense.

Technicians even dismantled the massive blond-haired child’s bicycle to make sure he had not attached a motor.

Professor Henry Brubaker said: “He seems to exercise regularly but always manages to look like a fat, wet owl.

“We must therefore conclude that the so-called benefits of voluntary exercise are egregious horseshit.

“If not then Boris Johnson is engaged in a cynical deception for the purposes of self-promotion. Which seems incredibly unlikely given that he is just a roly-poly funster who wants everyone to be happy.”