A REGULAR Sun reader suspects the newspaper is using subliminal messages to try and influence his political views.

Wayne Hayes, from Stevenage, has found himself voicing political views he never knew he held and believes the paper could be to blame.

He said: “Whatever they’re doing, it’s subtle. I almost didn’t catch it.

“Maybe it’s an acrostic, where the initial letter of every word spells out a message about Ed Miliband’s inexperience with the economy.

Sun journalist Nathan Muir said: “If the newspaper is using subliminal stimuli techniques developed by the CIA’s Black Ops division, I’m as much a victim as anybody.

“I constantly find myself bigging up the Tories as if I was controlled by a sinister foreign tycoon with an unquenchable thirst for money.”

Meanwhile, Bill McKay, a Sun reader from Edinburgh, said: “This morning I’ve suddenly decided to vote SNP. Maybe if you stare at breasts for long enough you become a nationalist. How fascinating.”

Music playing from somewhere on computer 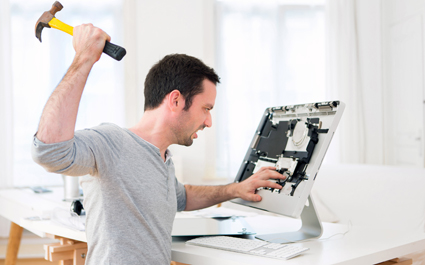 A MAN has been unable to locate the source of music playing on his computer.

He said: “I was doing a bit of work and had a few browsers open. I thought it’s probably one of those infuriating hair-trigger adverts they put in the middle of news stories like digital land mines.

“After a bit of fiddling about, I closed all the browsers but could still hear the irritating song. It’s one of those stadium-indie songs that goes quiet bit, loud bit, quiet bit.”

Malley checked his iTunes to find it was not the source of the problem.

“By this point I just wanted it to stop. Maybe it was a virus from looking at pornography.

“Again, that made no difference. Somehow the music is still playing.

“Finally I took up some floorboards and stuck the computer beneath them. But I can still hear it, faintly like ‘tap-tap-tip-tap’.