Teachers Can Get 10% Pay Rise When Children Are 10% Less Stupid And Awful, Says Everyone

TEACHERS should be entitled to a 10% pay rise when the children they teach become 10% less moronic and unbearable, according to a new survey. As the National Union of Teachers demanded an inflation-busting pay increase while thousands lose their jobs and the country is eyebrow-deep in debt, 100% of those surveyed said: "What the fuck did you just ask me?"

Emma Bradford, an unemployed shop worker from Stevenage, said: "Did you just say that teachers want a 10% pay rise? Is that what you fucking said?

"I've just spent two hours queuing at the job centre to talk to someone who doesn't care if I live or die and you're asking me if teachers should get a 10% pay rise, a four day week and more holidays. You know what? I'll have to think about that."

She added: "Oh look, I've thought about it and NO, THEY FUCKING SHOULDN'T."

Bill McKay, an unemployed personnel manager from Darlington, said: "You can have a 10% pay rise when your schools stop churning out a seemingly endless supply of rude, lazy, violent, stupid, little SHITS.

"And as for holidays, you can get five weeks the same as everyone else, even if that means sitting in an empty classroom all day and staring out the FUCKING WINDOW."

He added: "Now, if you'll excuse me, I am going to have to nip home, grab a three-iron from my golf bag and spend some quality time in the teachers' car park at my local high school." 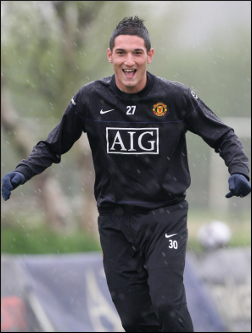 FEDERICO Macheda has the potential to become one of the greediest tosspots in the Premier League, his agent said last night. Julian Cook said the Manchester United striker was a 'really exciting talent' who, with the right guidance, would just get more and more selfish and obsessed with money with every passing year.

The Italian has burst onto the scene at Old Trafford by becoming only the 4825th striker to score against both Aston Villa and Sunderland.

Macheda said: "Already I put myself way before my team. My hair looks like a deep-fried kitten and I am happy to be paid no more than the GDP of Sweden, or maybe Portugal."

The striker hopes to sign a five-year contract worth £1m a year, which he then plans to renege on for more money some time in 2011.

He is already in talks with several clubs he intends to betray United fans for, and has lined up top-flight denials from Juventus, Barcelona and AC Milan.

Cook moved into football representation from the music industry, where he negotiated a six-album, £12m deal for Spanish novelty band Las Ketchup following their hit 'The Ketchup Song'.

He insisted Macheda's contract is 'good for the club, good for the fans and good for my childish obsession with absurdly expensive cars'.

Meanwhile Lazio have lodged a formal complaint regarding United's handling of Macheda. A spokesman said: "They treat the boy like a piece of meat when he was contracted to be our piece of meat for another two years."