Which hate figure should you burn in effigy this weekend?

BURNING Guy Fawkes on your bonfire is so 1600s, but which of 2017’s many hate figures should you burn instead?

Check out our Mash guide:

The obvious choice, effigies of Trump are easy to make at home because he already looks like clothes irregularly stuffed with newspaper, child’s gloves and a badly-sculpted papier-maché face. However the large amount of hay required to craft his hair could blow away once ignited and prove a fire risk.

Could be considered passé, but still deserves ire for expecting to stroll into the White House like it was the family greengrocery business and then writing a whining, buck-passing book about it.

Much as you should always check bonfires to ensure that children or hedgehogs are not hiding in them before lighting, always check any effigies of Jacob Rees-Mogg to ensure you are not inadvertently burning the genuine article.

The man who threatens to turn the world into ashes deserves to be burned, despite the high probability that it’s all his dad’s fault for spoiling him. Fun and simple to construct: just pop a pair of glasses and poor man’s Elvis wig on an over-inflated balloon and you’re good to go.

If you’re holding a bonfire in an area of mixed political views, it can be difficult to choose an effigy that everyone agrees with. But whether you’re far-left or alt-right, everybody blames the ills of the world on women. One side can think it’s Angela Merkel, the other Laura Kuenssberg and everybody’s happy.

The Hollywood producer turned international sex abuse exposure catalyst should have been sitting atop bonfires for decades. A popular choice, but good luck getting it to the top of your bonfire without it being kicked to bits.

Has a £132 million fortune even though she is only 29. Burn the witch. 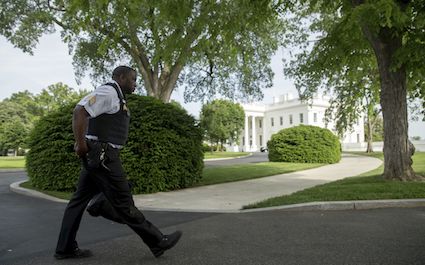 A US Secret Service agent on his final day working at the White House has deleted Donald Trump before leaving.

The agent, who was part of the detail guarding the president and his family, apparently waited until his supervisors were on their break, sneaked upstairs, cancelled the president with his SIG Sauer P229 sidearm, and then left the building whistling.

A White House spokesman said: “Unfortunately there’s not much we can do. He’s no longer an employee.

“It was 11 minutes before anyone noticed and he’d already clocked out, looking unusually cheerful according to the staff on the doors, and strolled off down Pennsylvania Avenue. He’s probably still laughing in one of the bars.

“It’s regrettable, and against our code of conduct, but we’ve got a back-up vice-president who was sworn in very quickly, so no real harm was done apart from embarrassment.

“That agent is definitely not getting a good reference from us, though. So it’s him who’s ended up looking the fool.”

Steve Malley of Kansas said: “Hey, when I quit Applebee’s I changed the code on the bathroom so nobody could get in. Everyone does these little pranks.”