Top swearwords for cowards too afraid to swear f**king properly

WE all have our bad days which is why we’ve developed the vocabulary to describe shite, shitty or piss-awful experiences. But some arseholes say this bollocks instead:

There are few things in this world so insignificant that ‘shoot!’ would be appropriate. A change in direction of a light breeze, maybe. But anything more annoying than a dropped spoon, and you need to break out the full, unadulterated ‘shit’. It’s nothing. Your granny says it.

Some may deem it sacrilegious to take the Lord’s name in vain. Others argue that those who think it’s ‘in vain’ to call on a higher power have never stubbed their toe while carrying a fresh mug of coffee. They’re calling on a divine entity to save them from the worst f**king pain known to humankind, just like Christ himself did.

Aside from Cockney chimneysweeps, no one should be breaking out a ‘blimey’ to express surprise, excitement or even alarm. If you want something mild to use around a young child, use ‘bloody hell’. They’ll still get in trouble if they say it at school, but at least they won’t sound like Oliver Twist begging for extra gruel.

Who is Louise? Why is she getting dragged into it? Every good woman will admit that she’d rather hear a man drop a ‘twat’ or a quick ‘bitch’ rather than resort to piss-poor feminine swearing of this variety. Grow a pair.

Quite apart from ‘fudge’ already being semi-rude as part of ‘fudge tunnel’, this childish attempt not to drop the F-bomb cheapens everyone who hears it. The Anglo-Saxons didn’t come up with such a good strong expletive for you to water it down like that. Have some f**king respect.

‘A load of rubbish’

Now you’re just being lazy. Your life’s not just rubbish, it’s a heap of crap. A great big load of bollocks. A steaming mound of flaming shit. If you’re still resorting to describing the situation as ‘rubbish’, you’re not facing your problems head-on. Someone needs to swear at you, and fast.

I oppose global catastrophe more than anyone, but by making me late for work Extinction Rebellion have gone too far 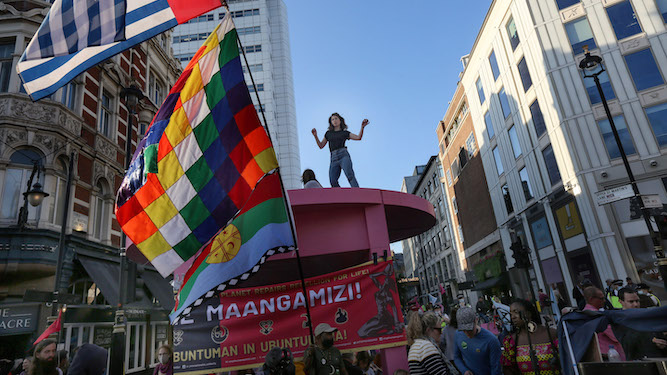 YOU won’t find anyone more opposed to climate change than me. I recycle, I haven’t flown since 2019, and my next car will be electric.

But when the terrorists of Extinction Rebellion cause me to be 40 minutes late to work, earning me a verbal reprimand from my boss, then I think we can all agree they have to be stopped.

A global temperature increase of 1.5ºC by 2040 means extreme weather events around the world. Melting icecaps will destroy thousands of British homes. In a century, human life could be unsustainable. But I’ve got to work until bloody 7pm to make up the time now.

How is it helping the climate catastrophe for me to be in the boss’s office having a strip torn off me this morning? Perhaps Greta Thunberg would like to step in and get my bollocking?

To clear any doubt, I am a supporter of Extinction Rebellion. We are in an emergency. The world is on fire. I fully back any action they take in New York, in Paris, in Milan or Manchester. We have no other option.

But if they could assume London’s got the point – we’re all pretty environmental, I get the train in, I’d work from home but it’s not that kind of job – and lay off for a bit, then we reduce the danger of me being called into a meeting and finding that smug cow from HR already there.

Come on. I’ve got a reusable coffee cup. We’re planning to get solar panels installed when we’ve enough savings. That’s never going to happen if you bastards keep causing gridlock.

Enough is enough. For the planet, yes, but also for me personally in this specific situation where I’m in line for a written warning. So do me a favour and f**k off?