Eleven year-old Kyle Stephenson said: "There's a bit where someone gets their arm cut off by a deformed hillbilly with a rusty scalpel. You would expect them to be made to eat it, or beaten with it until their brains come out.

"But no, they just sit there haemorrhaging until they die. Death Factory is gay times infinity."

He added: "Nathan Muir in 4C has got a DVD of some drug dealers in a hot country being executed with machine guns. It's quite good, although it's still essentially boring.'

"Although I don't know how to spell it, the word for what I am is 'desensitised'."

Muir added: "Death Factory has minimal eyeball-gouging and they don't even have anyone eating their own insides. Basically, massive fail.

"I have already downloaded and watched the next 26 Saw and Hostel films, partly in the hope that it might somehow result in my parents going to prison so I can sit at home eating crisps until I puke.

"I've watched so much extreme violence that technically I should be a serial killer by now. But actually, I'm just quite annoying."

Pink Floyd Force You To Listen To The Bad Bits 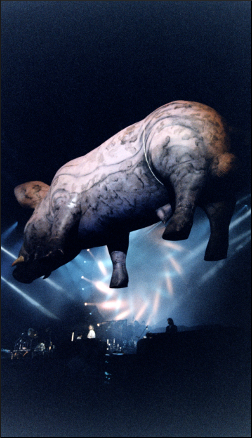 TEDIOUS prog rockers Pink Floyd have won their legal bid to make you listen to every last bit of their ghastly albums.

The group argued that single song downloads compromised the artistic integrity of the other tracks where Roger Waters bangs a pair of a tubas together for 20 minutes.

In their battle with EMI the band claimed the instrumental Matilda's Orange Pig, from their debut album This Does Go On A Bit, is integral to its story about a suicidal astronaut who just wants to grow broccoli on the moon.

Progrockologist, Dr Julian Cook, said: "Dave Gilmour continues to insist  that 'Pig' is an atonal note poem that deconstructs the intrinsic contradictions at the heart of a bottle of Vimto.

"But anyone who has actually listened to it would recognise the tuneless sound of the anti-drug movement gaining unstoppable momentum."

Meanwhile yesterday's ruling has encouraged The Moody Blues to make Nights In White Satin the last track on their greatest hits album.

Lead singer Justin Hayward said: "Gemini, Ride My See Saw, the fucking lot. The phrase 'never reaching the end' will be tattooed onto the front of your brain."

Pink Floyd's Roger Waters added: "There's no bricks and no walls until you listen to me complain about being a rock star for two hours, I'm afraid.

"If you're willing to sit through Dark Side Of The Moon while watching The Wizard Of Oz because… well, because you're an arsehole, then you can listen to me throwing my bass at Nick Mason for a while.

"That one's called Underground Spaniel Air Force by the way."