PC TOM Logan is determined to keep busting people for having tiny amounts of cannabis because he is a tosser.

39-year-old Logan is widely loathed by the community and his colleagues for being an anally retentive weirdo with a massive inferiority complex.

Logan’s partner Roy Hobbs said: “If I see a bunch of teenagers smoking a bifter I will usually pretend not to notice or just give them a bit of a stern look. But Tom’s always like ‘stop the car!’.

“Then he jumps out and rolls across the bonnet like an American TV cop. Then it’s full searches all round, which usually results in a nugget of  poor quality hash and a shitload of paperwork.

“I try to tell him we should focus on more pressing things like murders but he says ‘you can’t turn a blind eye to justice’.”

PC Logan said: “We have to send out a stern message to these young criminals of tomorrow. I might only be able to give them a small fine but at least they get a criminal record which will hamper them if they ever try to go on holiday to America.

“I don’t like these druggies and I don’t like their sarcastic manner. And I especially don’t like how they say I look too short to be a copper, which is not correct because I am five foot ten when I’ve got my boots on.

European tour group being shown around your house 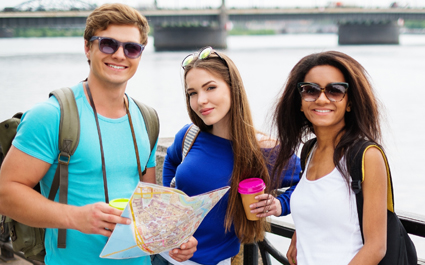 A GROUP of 20 European teenagers with backpacks is currently being given a guided tour of your home.

The teenagers, who speak an unfamiliar language and appear completely disinterested in their surroundings, are in every room of your house taking selfies.

Tom Booker of Chester said: “I heard the door and before I knew it they were everywhere, opening my kitchen cupboards while talking incomprehensibly about something else.

“The guide is in our spare bedroom – she uses the occasional English word like ‘armistice’ or ‘monastery reformations’ – but I can’t reach her because there’s a pair of Europeans munching garlic sausage and Tuc crackers on every stair.

“I can’t use the loo because there’s a couple making out in there, silently watched by her sullen friend.

“And in the hall there’s a lad wearing my hat and coat and doing twirls, but none of the rest are betraying any reaction. They’re all just on their phones.”

“Is shit. We go Disney Store after.”