Two-day hangover 'is passage to manhood'

A 23-YEAR-OLD has finally become a man after having his first multi-day hangover.

Although office worker Tom Booker is surprised to feel wretched for a second day, he knows that this mighty achievement marks the beginning of manhood.

Booker said: “Before today I was a man only in terms of my physical size. I had not known the pain of waking to a second morning of my head hurting so much that it feels as if my brain might leak from my ears.

“I think the major factor was mixing export lager with port. I’m still not clear on what port is but it really hurts.”

He added: “I feel weary but proud, like a young African tribesman who has just returned from surviving in the wilderness for a week armed only with a spear, to be blessed by the village elders.

“Except in this case the village elder is my dad, who is a bit angry because I puked on the kitchen wall. Even so, I can tell his heart is bursting with pride.”

Booker’s father Ray said: “He thinks he is a man now, yet he has only taken the first step. The trial of the three-day hangover still awaits him.”

Pub garden heater only works if you are basically touching it 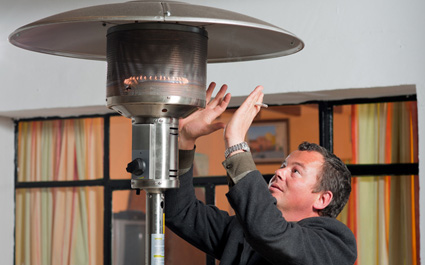 A PUB’S outdoor heater is only effective if you are standing within a half of centimetre of it, it has emerged.

Researchers investigating a pub’s claim to have a ‘fully heated smoking area’ found that to be bollocks.

Drinker Wayne Hayes said: “They have one of those metal heaters that looks like a science fiction lampshade. If you stand right next to it, it makes your back uncomfortably hot and itchy.

“But if you stand any further away from it, it makes no difference whatsoever.”

Onlookers observed that although the outdoor heater was doing its best, it was surrounded by an awfully large expanse of freezing cold sky.

Hayes said: “It’s a plucky little heater but the landlords are basically asking it to heat up the entire universe.

“It’s good for stubbing fags out on though.”