BRITAIN is in danger of going soft, experts have warned.

As researchers discover a 14% drop in people being hospitalised after a beating, there are fears that the UK’s indigenous fighting culture may be under threat.

Professor Henry Brubaker of the Institute for Studies said: “Beating the shit out of each other is one thing we British excel at.

“If you can walk around a UK city or a Friday or Saturday night without the constant threat of unprovoked violence, you might as well be in Spain or another awful foreign country.

“We need to work out if people are getting less beatings, or if it’s the quality of the beatings that has diminished.

“Perhaps the government could do more to increase violence on a regional level, for example by sending everyone in Wiltshire a letter saying ‘Somerset says you are a poof’.”

33-year-old Tom Logan said: “I don’t do fighting myself, but I like feeling more evolved than those who do.

“The government needs to enforce 9-for-1 deals on WKD.”

Fighting fan Julian Cook said: “I enjoyed a fighting, beer and kebabs lifestyle. Unfortunately the latter two made me so obese that my knuckles are now soft and oily, like two big pats of butter.”

Daft Punk revealed to be Elvis and Buddy Holly 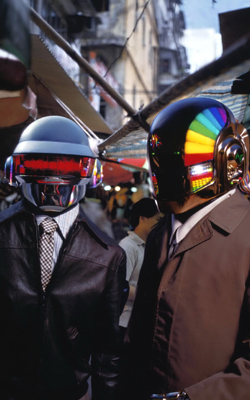 DANCE act Daft Punk have removed their robot helmets at a DJ gig to reveal they are Elvis and Buddy Holly.

He then spent more than 30 years working as a sous chef in Minnesota before travelling to Paris and getting into taking Es.

Elvis, who faked his own death in 1977 by slipping around the U-bend and escaping via the sewers, was already in Paris running a tabac with flatmate Jim Morrison when he bumped into Holly in a pissoir.

The duo created robot alter egos so that young fans would not discover they are almost as old as Pete Tong.

Fan Tom Booker said: I wondered why I was treating a new Daft Punk single that sounds like a moderately catchy disco B-side from 1981 like it was the biggest thing to happen in music this century.

“Subconsciously I must have known.