A DISGRUNTLED toddler has drawn his father into a conversation with another dad just to watch him writhe in awkwardness.

Two-year-old Roy Hobbs said: “I’ve become pretty savvy to my dad’s zero effort parenting. He literally drops me in the sand pit then he’s straight on the iPhone.

“He gets the internet, I get a bucket. Well not today mate.

“I saw this other dad who was just itching for chat but too socially awkward to get it going. I then ran off with his kid’s spade, sat back and watched the magic happen.

“Every time he tried to get back to his phone the other dad had more chat on bullshit like nap routines and low sugar breakfast options.

“The highlight was seeing him questioned on gender fluidity. He was really out at sea there; I loved every horrible minute of it.”

Hobbs added: “I’ve done everything I can do with sand, I need more.” 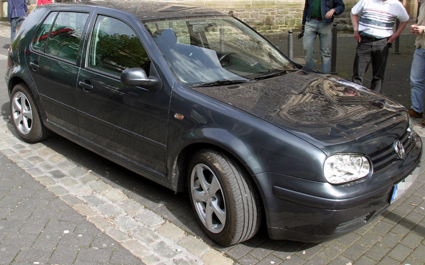 DRIVING a knackered old hatchback in central London now costs £21.50 a day, so everyone wants to do it.

Hedge fund managers, commodity brokers and oil billionaires are trading in their Maybachs and Bentleys for Ford Escorts, Vauxhall Vectras and Rover 200s with exhausts held on by gaffer tape.

Julian Cook, a cosmetic surgeon pulling in seven figures a year, said: “Your car cost you 200 grand? Sure. But what does it cost you per day?

“This little beauty – VW Polo, three doors, the winder on the passenger side window’s broken – costs me £21.50 a day. Five grand a year. And I pay it like it’s nothing.

“Seriously, check out the emissions on this bitch. The only time what’s pumping out of the exhaust isn’t blue is when it’s straight black. When I go past people think I’m a bus.”

Market trader Roy Hobbs said: “I can’t afford to run my 2000 Corrolla anymore. I had to swap it with some flash City bastard for a BMW 5-series that’s only last year.”

Mayor Sadiq Khan said: “London will be the most polluted city in the world by 2019. In your face, Bejing.”