COMMUTERS attempting to use Waterloo station have been loaded into containers and shipped 4,200 miles away.

Work has overrun on an £800m station upgrade, meaning train operators have been left with no choice but to transport passengers to a small island in the South Atlantic, never to return.

Commuter Helen Archer said: “Everything was fine until the announcer informed us there was no platform available and alternative arrangements had been made, which turned out to be being loaded into shipping containers subsequently put onto an RAF Hercules and flown to Ascension Island.

“I’ve called work and told them that I’m roughly midway between Africa and South America, and they have been very good about it – everyone’s been through something similar. We might get a free cup of tea in a bit.”

A spokesman for Network Rail said: “For customers’ convenience it has been necessary to use a rail replacement service which has sent them into permanent exile from the UK. They have been given vouchers for a sandwich.

“The revitalised Waterloo will have longer platforms, more capacity and a Space.NK.apothecary offering the world’s best beauty products. So it will be worth it.”

Sneaking home without telling anyone is best bit of night out 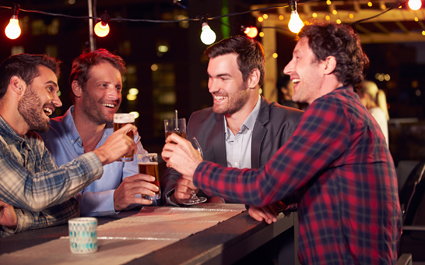 TELLING friends you are nipping to the bar then getting a taxi home instead is the best part of going out, it has been confirmed.

Although getting pissed and dancing to Taylor Swift at a shit club seems like a great idea at the start of the night, slipping away before the Jäger-train part of the evening happens is actually far superior.

Tom Logan, 31, said: “When I was 19 I thought I’d had an evening equivalent to the opening of Studio 54 if I ended up vomiting White Lightning into a shop doorway at 2am.

“As I’ve got older, it has been hard to maintain these cripplingly low standards and I have turned into the sort of arsehole who wants to feel fresh in the morning so I can go for a run.

“I am the type of who tells everyone he’s well up for staying up all night and getting munted with my old friends Mandy and Charlie, even though I’m secretly planning my escape.

“Despite claiming to be a good friend, I have no issue with lying to my mates and calling an Uber, then waking up the next morning to 57 missed calls from them and a half eaten doner.”