Waterman sparks debate about how Minder was actually shit

DENNIS Waterman has provoked a furious debate about exactly how shit Minder actually was.

Speaking into Piers Morgan’s gigantic face he said that badly written east end pantomimes made it very easy for actors of his calibre to play a pathetically cliched, two-dimensional rogue.

The ‘actor’, ‘singer’ and wife beater then insisted that very bad TV shows are not the same as TV show that are utter rubbish.

Helen Archer, from Peterborough, said: “His views on Minder are the same as a lot of older men and so I realised the only reason people were interested was because this particular old man had beaten his wife.

“But then it occurred to me that there was a really serious issue here and that I should give it some more thought. I eventually arrived at the conclusion that Minder was a lot of bollocks.”

She added: “I know a lot of people will be very offended by that and I don’t want it to be taken out of context, but Dennis Waterman is an appalling actor and the theme song sounded like Joe Coker being impersonated by Cliff Richard.

“I do wish Twitter wouldn’t make it so easy for me to get all worked up about the shitness of Minder.”

A spokeswoman for the domestic violence charity Refuge said: “It’s one of those shows from the 80s, like Lovejoy and Press Gang, that everybody remembers very fondly until they see a repeat on ITV3 and go ‘Jesus Christ, that was pish’. 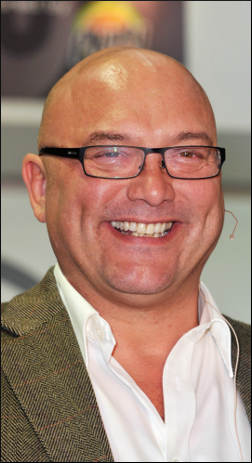 MASTERCHEF host Gregg Wallace has left the home he shared with a live-in crumble.

Wallace met freshly-baked apple and wild berry concoction Jenny Spencer after the dessert sent him a Twitter message saying she had accidentally spilled a generous amount of cream over herself.

Following a brief online courtship Spencer, who is topped with nutmeg and lives in a deep rectangular dish, moved into Wallace’s beautifully-appointed Home Counties fridge.

“During his last single phase we would see tarts and cakes turning up at all hours.

“The door would open just wide enough for his pudgy hand to seize them and seconds later the empty bowl would come flying out of the bedroom window.

“But this one seemed like a keeper. We would see them out together on the patio but Gregg only ever had a small portion, clearly he wanted it to last.”

A spokesman for Wallace denied claims the presenter had grown close to a chocolate roulade with an orange and Grand Marnier sauce from Comeback Week.