Wearing jeans prevents you from getting old

WEARING denim can ward off old age and even prevent death altogether, it has emerged.

By wearing a pair of Levi 501s after the age of 50 you can expect to prolong your youth indefinitely and not have to worry about the ravages of senility.

Experts said jeans offset the effects of excessive alcohol and tobacco, even hard drugs, which can be enjoyed to the maximum in the knowledge that the jeans will protect you.

Professor Henry Brubaker, of the Institute for Studies, said: “For a long time we thought this was just the weak-minded, wishful thinking of poodle-haired old men.

“Now, thanks to experiments involving wrapping elderly rats in denim patches and monitoring their impressive survival rates, we realise it is scientific fact.

Refugees asked to just hold on while we have this debate 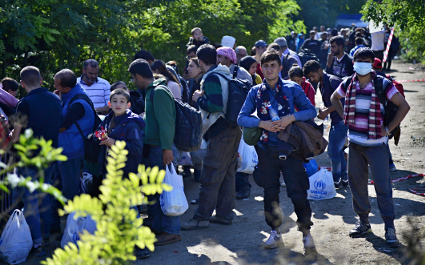 REFUGEES from Syria have been asked to just drive their boats in a circle until Europe decides what to do with them.

More than three million people who have fled the war-torn country have been assured the debate will be fair, inclusive and probably work out in their favour if they just hold on where they are for a bit.

“There’s nothing more annoying than when you’re trying to set the terms of a debate, construct your arguments and so forth to have someone tugging your sleeve going ‘But my wife, my brother, my family.’

“Just find yourselves somewhere comfortable while we get this done and be patient. Now, whose turn is it to do biscuits?”

Refugees currently at or near national borders have been asked not to cross them, anyone swimming toward a foreign shore should tread water, and anyone who has jumped aboard a lorry or train should continually jump between lorries or trains travelling in opposite directions until notified otherwise.

Juncker added: “Maybe have a game of cards or something, it could be a while.”