Why are all the pubs closing? ask people who never go to the pub

MILLIONS of people across Britain who never go to the pub have been asking why all the pubs were closing down.

As it was revealed that 1000 pubs have closed in the last year, non-pub goers said their community would not be the same without the local pub they never went to.

Margaret Gerving, from Peterborough, said: “I was delighted when the smoking ban came in because it meant I could finally go to the pub without being killed.

“But then I didn’t, mainly because I’m not the sort of person who likes going to pubs. I prefer to stay in with a carton of pomegranate juice and a bag of pine nuts and make long lists of all the things I want banned.

“Now it turns out that nobody else is going either because quite a lot of the people who used to go to the pub also liked to smoke. But none of this explains why all the pubs are closing down.”

Julian Cook, from Devon, said: “Our local pub looks really lovely from the outside. It’s got flower baskets and a nice old fashioned sign. Unfortunately it’s used by local people with accents who dress differently from me and who are, I suspect, incredibly racist.”

Former pub owner Charlie Reeves, from Hereford, said: “We were told that the smoking ban would mean lots of young mums and dads bringing their children in. But that didn’t really help because there’s only so much Guinness you can pour down a three year-old before it falls asleep.

“Then there’s the added factor that a pub with children in it isn’t really a pub, it’s a fucking hellhole.”

Someone Claiming To Be Me Has Been Saying It&#8217;s All Your Fault, Brown Tells America 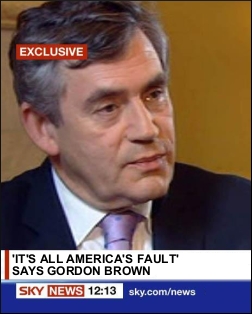 GORDON Brown yesterday told America that someone has been going around blaming them for the global economic collapse and using his name.

In a keynote speech to the US Congress Mr Brown said he was 'shocked, shocked I tell you' to discover that a man claiming to be the British prime minister has used every possible opportunity over the last 12 months to lay the blame squarely at America's door.

The prime minister said: "He goes on television and says 'the economic crisis originated in America and then spread across the globe'. That's his catchphrase. But get this, right, the caption at the bottom of the screen says 'Gordon Brown, Prime Minister'.

"And I'm just sitting there watching it, thinking 'bloody cheek!'. And then I go into the office and everyone's saying 'good interview, prime minister' and I'm like, 'for fuck's sake, it wasn't me, okay?'.

"Granted, he does look a bit like me and the voice isn't bad, but the way you can spot the difference is that horrible, creepy smile. I don't smile like that. Look."

To a standing ovation Mr Brown added: "I like you. No, I mean I really like you. A lot.

"Sometimes I think about the two of us having dinner and we talk about all the stuff we have in common and then we move over to the sofa and I run my hand up the inside of your thigh and our eyes meet and we lean into each other and then all of a sudden we're just doing it.

"I need you. I need your hot breath on my neck. I want to lick every inch of you. I want to feel your urgent hands investing in my naked, heaving buttocks.