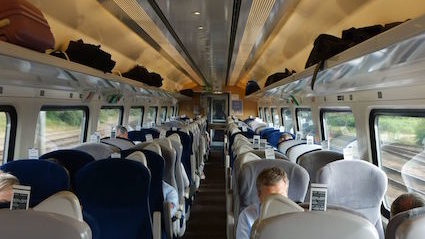 A WOMAN travelling in a train’s ‘quiet zone’ has declared the entire journey must be spent in a deathly, mausoleum-like silence.

Mary Fisher, travelling between Stevenage and Doncaster, has warned her fellow passengers that quiet phone calls or ‘leakage’ from headphones is a ‘violation’ and has threatened to call the police.

Fisher then sat next to fellow passenger Nikki Hollis who had just taken part in a very quiet telephone conversation with her boyfriend.

She said: “I think you will find that this is the Quiet Zone. If this happens again I will ruin your life.”

Hollis then whispered: “Would it be okay if I listen to some music very quietly on my headphones?”

Fisher is currently standing on her chair, pointing at Hollis and shouting ‘this is a crime’ over and over again. 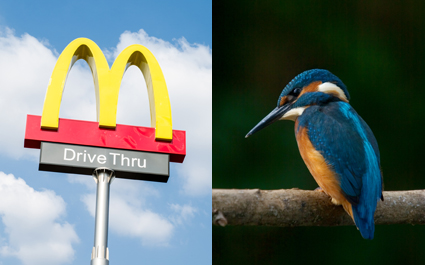 BURGER chain McDonald’s has a secret menu that is even more repellant than its official menu, it has been confirmed.

Previously thought to be an urban myth, former McDonald’s manager Tom Logan confirmed the existence of the ‘Black Menu’ for its most depraved customers.

He said: “There’s a tiny hardcore of freaks who know the code phrase, ‘take me down, down, down to meaty town’. After saying that they can choose anything from the so-called Black Menu.

“Nobody knows where the Black Menu comes from, but it is believed to date back to medieval times.

“To make the Black Menu meals you have to go away on a special training course to Stoke on Trent, which last eight years. During that time you will be broken physically and mentally, then rebuilt with a new personality.

“However, afterwards you do get a 38p per hour pay rise.”

“It’s just a dozen Big Macs stacked on top of each other, not sure why really. You only have to take it apart to get them in your mouth.”

“It’s a banana split in half down the middle, that someone’s done a shit in.”

Kingfisher In A Bap

“This one takes time to prepare because usually they shoot the kingfisher to order. However they do keep a box of ’50 x Frozen Kingfishers’ in the freezer for emergencies.”

“Take a ball of mince the size of a fist, season, stick it in a blender with two scoops of fresh dairy ice cream.”

“No more or less rank than other chicken items on the menu.”

“Take a ball of chips the size of a fist, and eat it.”

“Nobody knows where the lungs come from. From looking at them I would say maybe a monkey.”

Death On the Nile

“This one’s hard to describe. It’s a plastic box full of flies with a surprise at its core.”