Woman not joking about star signs

OFFICE worker Donna Sheridan was not joking when she discussed the royal babys star sign, according to her colleagues.

However it soon emerged that she actually believed the childs personality would be determined by astral bodies.

Co-worker Nikki Hollis said: Donna said that if the baby was a Leo it would be feisty and outgoing, but if it was born under Cancer it would be sensitive, which was interesting because I didnt know she was mad.

She was specific about it having a different personality if it was born after 4.54pm with its moon being ‘in Capricorn’. It was like Nostradamus had suddenly walked into the office.

As it turns out the baby was born under Cancer, which apparently means that a group of stars 290 light years from Earth have somehow made it family-oriented and thoughtful.

Sheridan defended her predictions about the babys future personality, saying she had researched the topic thoroughly using OK! magazine and the internet.

Sheridan said: Cancerians are gentle, kind-hearted, romantic and sensitive. Admittedly 50 Cent is a Cancerian, but hes probably the exception that proves the rule.

These are all qualities that will help the baby in its royal duties, although Cancerians can be moody, which could be awkward when it grows up and has to pretend its interested in stuff like Maori dancing.

Princess Dianas star sign was Cancer too, which is amazing. Theres no way that could just be a one-in-12 chance. 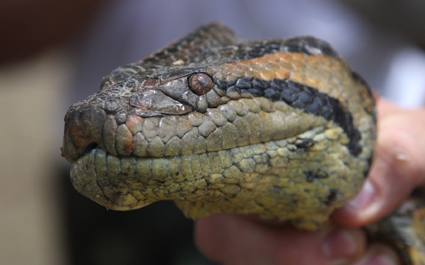 A NINE-FOOT boa constrictor is celebrating after having a litter of 23 tiny snakes on the day the royal baby was born.

Female boa Emma Bradford said: “At the same time Kate was in labour, I was firing out a massive, healthy brood of squirming snakelets.

“How funny to think that my scaly, mouse-eating offspring will share a birthday with the future king of England.”

Bradford, whose ovoviviparous nature means that she has live young instead of laying eggs, added: “I wonder if we’ll get sort some of message from the Queen, or maybe a few premium bonds.”