A WOMAN has rolled her eyes at the latest Harvey Weinstein revelations and then got on with doing her job, it has been confirmed.

Jane Thomson, a teaching assistant from North London, scrolled through a story on the Guardian website during her commute, shook her head briefly and then focused on her poorly paid job helping to educate children.

Thomson said: “I don’t really have time for this because I’m trying to earn a living. But yeah, the idea of a powerful man in the film industry sexually assaulting women who were then too frightened to come forward has come an absolutely enormous surprise.

“Thank goodness I was sitting down when I read it otherwise I might have fainted.”

Thomson added: “I’ve been searching for a headline about a male movie star revealing he was sexually assaulted by a female movie producer.

“But that’s unlikely because there are, I don’t know, two female movie producers? And they probably just get on with their jobs too. 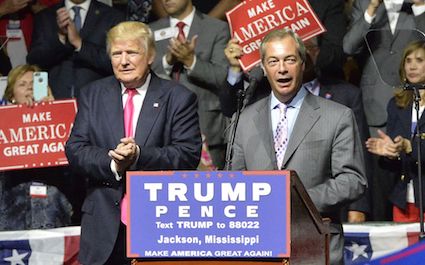 PRESIDENT Trump’s visit to the UK has been downgraded from being an offical guest of the Queen to sharing a bed at Nigel Farage’s place, it has been confirmed.

Following threats of protests which Her Majesty has gratefully seized upon as an excuse, the state visit has been reduced to two days at the former UKIP leader’s flat and complimentary crazy golf.

Farage said: “It goes without saying that I’m the tail in this scenario. He’s the leader of the free world, after all.

“I’d happily give him the sofa, but I’ve only got the one duvet and there’s nothing wrong with sharing a bed as long as we’re safely inverted so nothing can happen.

“It won’t be in the least uncomfortable, despite the liberal media elite’s claims, though I am open to negotiation if he wants to place something long and heavy between us in the bed.”

A White House spokesman said: “The President is very much looking forward to visiting the comments section of Mail Online, which he has heard so much about.”