Woman discovers husband is a twat

A 31-YEAR-OLD woman has been traumatised by the discovery that her husband is a bit of a twat.

Hairdresser Emma Bradford married recruitment consultant Tom Booker last year, but it was only after the honeymoon that she started to realise the truth about his personality.

Bradford said: “Before the wedding he did not seem to be a twat, in fact I really liked him. He was hiding that side of his character.”

Warning signs soon began to appear, with Booker putting a bollard in the parking space outside their house whenever he went to work, just to stop others using it.

“I discovered he would never back down in an argument, even if it meant spending three days on the internet trying to prove that an antelope was a type of massive goat.

“One time Tom was talking about doing a loft conversion and said ‘we just need to drop a few grand on it’. That was when I rang my mother and told her I had made a mistake.”

Bradford’s mother Susan said: “I knew from day one that he was a twat, but she seemed to like him so I bit my tongue. Maybe I thought he would become less of a twat as he got older.”

However Bradford has no plans for a divorce. She said: “Almost all of my friends are married to twats. The key is to keep working hard, and hopefully one day buy a house big enough that you can avoid them.” 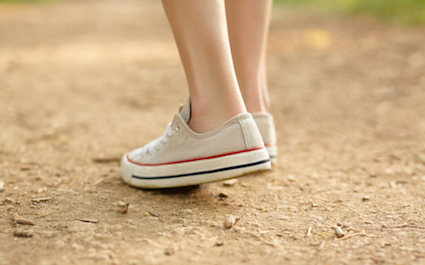 A WOMAN has vowed that she will wear thin-soled canvas trainers through the depths of winter no matter what the cost.

Francesca Johnson, from Chester, insisted the shoes, intended for wear in long, hot American summers, are now part of her personal look and cannot be abandoned for mere weather.

She said: “The cold is a problem immediately on leaving the house, but within 40 minutes I actually can’t feel my feet for the rest of the day, so that’s fine.

“The skin around them has gone white and blue but the trainers themselves are white, so stylewise it’s all good.

“My boyfriend says I should wear socks, and I’m like ‘hello, socks with Converse? Do you want me to be laughed at?’”

She added: “I am a little bit concerned about losing toes, because from the end of March I’m scheduled to spend the next six months in flip-flops.”