A WOMAN moved to tears by the Pride of Britain awards is also pleased about new benefits cuts.

Bradford said: “Seeing all those people coping with difficult circumstances was very moving, I was in bits over the little lad who raised £10,000 selling homemade biscuits on the internet to buy a new wheelchair for his mum.

“But that in no way affects my view that there are too many scrounging benefits bastards.

“You wouldn’t get a benefits person jumping into a river to save someone because they’d be at home eating frozen pizza and smoking.

“I think Pride of Britain proves that the worse people’s problems are, the more they try to overcome them, so we could motivate the unemployed by giving them serious illnesses.

“If they battled their illness and managed to get a job as well you could give them an award. That would make a really good TV programme.” 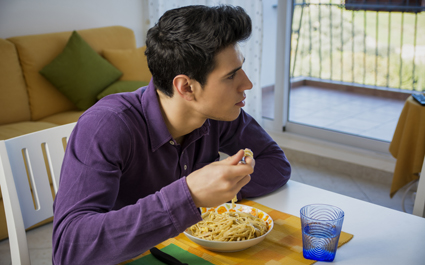 A MAN uses the expression ‘al dente’ wherever possible, it has emerged.

25-year-old estate agent Julian Cook uses the term a lot because it makes him feel refined and clever, even if he does not know what it means and just thinks it is a general term for luxury.

He said: “This pasta is perfectly al dente. So are the accompanying vegetables.

“This glass of wine is al dente too.”

Cook has also described his car and his dog as being al dente.

His girlfriend Emma Bradford said: “It all started when he seriously undercooked some pasta and I said it was al dente so that he wouldn’t feel bad. I could see from the way he looked at me it was like a lightbulb had gone on in his head.

“Last night he told me his wants to start a nightclub called Al Dente. I just said it sounded really good.”