A 29-YEAR-OLD woman’s bizarre and convoluted dream has no meaning whatsoever, it has been confirmed.

She said: “A bear bit me on the hand. And then I was with my sister and she was getting married to Daniel Craig but it wasn’t Daniel Craig, if you get what I mean?

“Then the bear and Daniel Craig were walking around some woods in the rain, looking for an Ikea.

“Suddenly I was on a plane going to Australia for a wedding when the cockpit door opened and the bear was flying the plane. John Travolta and Mel Gibson came past in a hot air balloon.

“I know there’s a message there. It means something – but what? Probably it’s about fear of change.”

Hollis has since bought a book from Amazon called Mysteries of Dreams Unlocked, which has a section on ‘Daniel Craig bear dreams’. 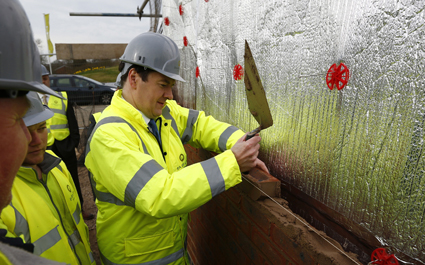 GEORGE Osborne has threatened to ‘disappear’ everyone on a building site after they criticised his bricklaying technique.

The chancellor put on a hard hat to promote Tory home-building plans, then engaged in a bit of pretend building.

Osborne said: “This is actually where I feel most comfortable. On a building site, with real honest working men.

“I would probably be a builder if my life and family background were completely different. I love working with bricks.”

However builder Wayne Hayes said: “You’re putting on a bit too much mortar there.”

Osborne replied: “I’ll put on as much or as little mortar as I fucking well want.

“One phone call and you’re all fucking dead. Seriously I have done that before and I can do it now.

“Your lives are not important.”

Ten minutes later he left the site, bidding the builders farewell: “Cheers everyone, let’s have loads of pints soon.”