Women ‘may understand concept of models’

WOMEN do not need to be constantly reminded that ‘real women’ exist who are not fashion models, it has emerged.

After Vogue devoted an edition to ‘real women’, the Institute for Studies found most women were not particularly confused by the idea of tall, attractive ones showing off clothes.

Woman Nikki Hollis said: “I’m not bothered about seeing ‘real women’ because my self-esteem isn’t so pathetically low I get an ego boost from being reminded I’m average.

“The fashion industry has some stupid ideas about attractiveness, but bear in mind these are people who think your life is over if you wear the wrong-coloured trousers in autumn.

“Also I don’t need some advert for soap telling me I am allowed to exist. And a burger is not a massive, naughty treat unless your life is extremely dull.” 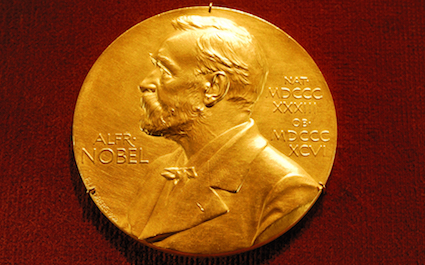 THE winners of the Nobel Prize in Physics have begun a lifetime of trying to explain their work to idiots.

Duncan Haldane, David Thouless and Michael Kosterlitz, who were all born in Britain but left it, hate it and will never return, yesterday admitted that their careers as scientists are essentially over.

Haldane said: “You’re not meant to get it. Nobody gets it. It wouldn’t be cutting-edge physics if you did.

“But today, which I spent presenting a radically dumbed-down analogy of our work to journalists who will get it completely backwards, is a mere taste of the horror to come.

“A lifetime applying advanced mathematics to theoretical physics, and my reward is never speaking to anyone who knows what I’m talking about ever again.

“Instead, I will dedicate my final years to the after-dinner circuit, telling fat businessmen who never got GCSE Maths that what I do is a bit like what they do so they feel superior about driving big cars.

“So what was my big discovery? Jesus. Here we go. Imagine a really massive doughnut.”