WOMEN’S pay is lagging decades behind men’s to remind them of when they were younger, bosses have claimed.

Chief executive Norman Steele said: “Ladies hate getting older and a low salary makes them feel they are still a junior employee embarking on the great adventure of life.

“Most of our female staff are paid so little they probably think it’s still 1995 when they were in their 20s and their only worries were hangovers and getting tickets to see Suede.

“Thanks to their meagre pay many still live in shared rented accommodation and have to keep borrowing money from their parents. It must be wonderful to feel young again.

“Obviously we don’t need to restrict men’s pay because they don’t age as badly and just become ‘distinguished’, like Blake Carrington.”

45-year-old office worker Donna Sheridan said: “When my boss said how young I looked I thought it was a compliment, but he was just trying to convince me it’s still 1996.

“I must admit it’s quite easy to think that because I’ve got a permanent overdraft and Liam Gallagher is still a massive twat.” 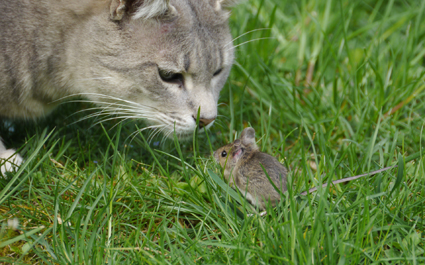 A CAT and a mouse are engaged in what can only be described as a lethal game of cat and mouse.

The small mammal and larger carnivore are in a tense pursuit situation where one wrong move could mean death.

Mouse Roy Hobbs said: “I’m a mouse, he’s a cat, so it’s very much that type of scenario.

“But not a ‘cat and mouse situation’ where a troubled cop pursues a twisted serial killer, like in a disappointing film with Russell Crowe or Gerard Butler.

“This is much more of an actual cat, actual mouse type thing.

“It’s the kind of situation where ideally you don’t want to be the mouse because the cat is very much holding all the cards. But hey, what can you do?”