TWO youths convicted of selling cannabis in Wolverhampton have been sentenced to a fortnight at Hilton Park services on the M6.

Magistrate, Roy Hobbs, said the experience of spending 14 days amid the smell of all-day breakfast, the bickering of married couples, the screeching of toddlers and the music of the Fireman Sam ride would be ‘immensely harsh but fair’.

Hobbs further warned that if either of them came before him again he would not hesitate to have them detained in a Cumbrian Centre Parc ‘at Her Majesty’s pleasure’.

The sentence was condemned as inhumane by the Howard League for Penal Reform who drew attention to a recent European Court of Human Rights ruling that the sentencing of a Tyneside joyrider to a week standing by the ball pool in Gateshead Ikea was illegal.

But Hobbs insisted: ‘This is just one of the reasons I voted for Brexit. We in Britain have a long tradition of using motorway service stations and airports as correctional facilities. How do you think all those spotty reprobates in shell-suits got to be hanging around the duty free toblerones at Gatwick?” 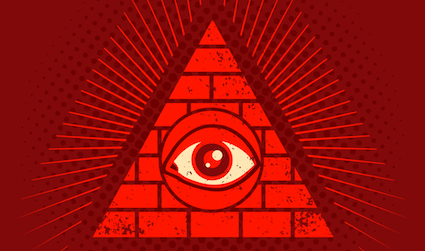 CONSPIRACY theorists have finally been convinced there is no secret society running everything because no-one could possibly believe any of this was orchestrated.

Since the dawn of the internet, bedroom-based conspiracy theorists have thought society was controlled by a shadowy alliance of the Freemasons and  the ‘Illuminati’ who have somehow had the manpower to run everything, fake the moon landings and kill John F. Kennedy.

Tom Logan, from Stevenage, said: “If they are running it then someone needs to be sacked.

“Or sacrificed, if that’s what they do.”

Racist, Norman Steele, added, “I used to think the Jews were running everything. But they seem pretty organised, so I can’t imagine they’d be behind this mess.”

Professor Henry Brubaker, from the Institute for Studies, added: “When you look at the current state of affairs, it’s pretty clear who is running it.