Former MI5 Chief Finally Gets It

THE former head of MI5 last night finally twigged that thing the rest of us realised about seven years ago.

Dame Stella Rimington said the government was exploiting the public's fear of terrorism to restrict civil liberties, before pointing out that Top of the Pops isn't on anymore either.

She told a Spanish newspaper: "I was having a cup of tea and a scone when it suddenly occurred to me – all these things they're doing might not be about terrorism after all.

"Maybe, right, they're just trying to scare us, yeah?… so we'll let them take away our freedom, yeah?… all the while believing that it's really for our own good… d'you see?

"Restricting freedom of speech and locking up brown people without trial will do nothing to stop bombs.

"And what the bloody hell's happened to Top of the Pops?"

Dame Stella added: "Admittedly it might have been better if I'd realised all of this a tad earlier. But not to worry, now that I'm just an ordinary citizen I can really do something about it." 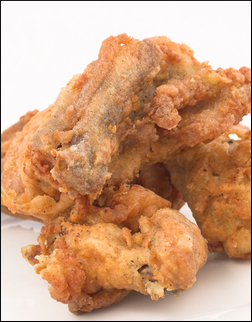 BRITAIN is well on its way to becoming a largely bucket- based economy, it was claimed last night.

As Kentucky Fried Chicken announced 9000 new high- quality food shovelling jobs, ministers predict that by 2011, 82% of the country will be employed selling each other a variety of unpleasant things in a bucket.

Rival fast food chains are now developing their own versions of the bucket model. McDonald's is currently testing its Bucket of Beef'n'Cheese, while Pizza Hut is to throw the ingredients of a Pepperoni Feast into a cheese-lined bucket and give it a good shake.

Employment minister Martin Bishop said: "People do seem to enjoy taking things out of and putting things into buckets.

"Although at the moment it is mainly food and the regurgitated version of the same food.

"But we've also noticed an increase in the number of people who enjoy drinking coffee and soft drinks out of a bucket which they then leave on the pavement so that it can later be filled to the brim with tramp urine."

He added: "We'll also need thousands of new, high quality plastic buckets so that anyone not working for a food shovelling organisation will be able to pursue their primary economic activity of collecting things from skips and bins.

"And of course, if you have two good arms you can carry two buckets – one for your waste products and one for the bric a brac you collect from the bins which you'll then sell in order buy your daily bucket of deep fried chicken parts.

"I think everything is going to be just fine."