Guilty: The Twats Who Made Airports Even Worse

THREE twats were convicted yesterday of somehow managing to make British airports even more fucked-up than they already were. Thanks a fucking bunch

Abdulla Ahmed Ali, Tanvir Hussain and Assad Sarwar were found guilty on three counts of turning the UK's airports into the worst places in the world and a lesser count of wanting to blow up an awful lot of planes.

The three had plotted to make airports hellish by trying to make a bomb out of a small bottle of Lucozade thereby ensuring everyone has to dig around in their bag for all the small bottles they packed while fretting over whether or not toothpaste is a liquid before just putting them all in a see-through plastic bag so that hundreds of strangers can see their economy size tube of Canesten.

Justice Finch-Hatton said: "You planned this crime ruthlessly and with no regard for the sorry bastards who use British airports.

"You callously fucked-up air travel for a generation and made thousands of people want to die. You are twats."

Tom Logan, an accountant from Finsbury Park, added: "Because of my job I have to go to Scotland about once a month. Thanks to you I now have to get the train. That's right, I actually get on a British train.

"Spending five and a half hours sitting across from a very drunk Scotsman who has recently shat himself is still marginally preferable to taking my shoes off and standing in 14 different queues at Gatwick while desperately trying to hold my trousers up.

"I hope you rot in hell, you utter fucking twats."

Slovenian Banned For Life After Being Stabbed By Wayne Rooney 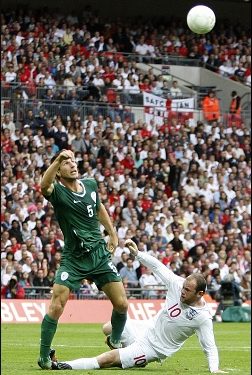 SLOVENIA'S Bostjan Cesar has been banned for life from football after allowing himself to be stabbed by Wayne Rooney. The England striker knifed Cesar after he reached past him in the players' lounge for some peanuts. CCTV footage shows him nearly nudging Rooney, prompting the Utd player to go to his car for a Stanley knife.

"I know the police do a dead difficult job so I was made up when they arrested him for coming anywhere near me."

UEFA president Michel Platini said: "This is entirely consistent with our arbitrary decision making process. Tomorrow we may decide Cesar has to play six games wearing a top hat. It's all just one big adventure."

But the celebrations were tempered by news that Emile Heskey had been humanely destroyed. The striker struggled to make his way around the pitch before being shot by a qualified marksman and turned into Whiskas.

England fan Charlie Reeves, said: "Watching him stumble about the place, getting in people's way, it was horrible. Even the Slovenians thought it was cruel and they throw dogs off bridges and stuff, don't they?"