THE spiders living in a suburban house have broken their truce with the human co-occupants by entering the forbidden zone of the bedroom.

Tom Logan was woken by wife, Clare, to hear the grave report that a spider had been sighted under the wardrobe, breaching the terms of the human-arachnid treaty.

He said: “It’s the news I hoped I’d never hear.

“We’ve lived in a state of fragile peace since the infamous shower incursion of 2016, but this is a clear, unmistakable act of aggression from the spiders.

“I kept to our unspoken agreement by removing the offender with a glass and a postcard, letting it live, but if any are seen closer to the bed I will terminate with extreme prejudice.

“The spiders have their territory in the attic and under the stairs and we respect that, only entering once a year. But this is different. It knew exactly what it was doing.

Spider Stephen Malley said: “Yeah, we’ve elected a new hardline leader on a platform of taking the bedroom for our own. Sorry about that. Move out peacefully, or else.”

The Brexiter's guide to misunderstanding democracy 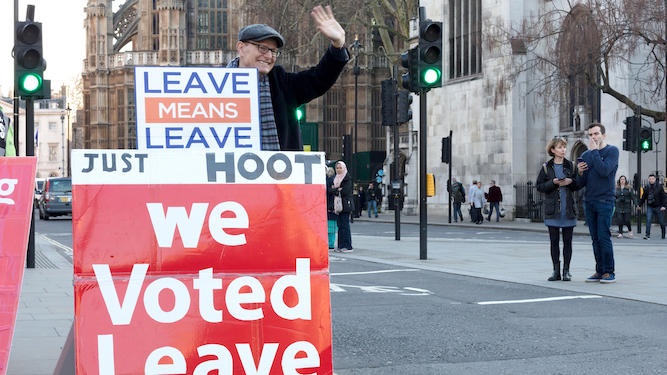 ARE you a Brexiter unable to stop howling about democracy despite not knowing how it works? Here’s how to be a shouty, ill-informed wanker:

Balance your belief in democracy with mental statements like ‘If Remoaners don’t like it, give them one-way tickets to Venezuela. And if they won’t get on the plane, set police dogs on them.’

Have a curious understanding of ‘majority’

52 per cent of Britain voted for the EU to f**k off. That’s a massive super-majority and the idea that it’s only 37 per cent of the electorate is just Remoaners twisting reality.

Know nothing about democracy except the vote bit

Separation of powers? Independent judiciary? A mountain of erudite thought is available in a split second on Google, but why waste your time with Tocqueville (French) and John Stuart Mill (three names, clearly posh) when the only important definition of democracy is ‘Brexit’?

Even though you didn’t give a toss about any vote before or since 2016, be absolutely batshit, brink-of-a-coronary furious about it all the time. If people shuffle away from you in the pub or your wife has left you, you’re defending democracy.

Believe MPs are your slaves

Prove your ignorance of representative democracy by insisting MPs must do exactly what voters tell them to. If someone provides a ridiculous counter-example, eg ‘So should they put sharks in swimming pools if idiots vote for it?’, just angrily reply ‘YES!’

Make shit up as usual

Everyone who voted for Brexit wants no-deal and fully understood every last detail, despite a lot of them believing patent nonsense like the EU wanting to change the name of bananas to ‘das Yellowenbendifreut’.