THE United Nations security council has paved the way for air strikes against Chris Moyles.

The international community has grown increasingly concerned for the civilian population of Britain as it is brutally hosed down with a stream of horseshit that appears to have started some time before the invention of radio.

A whole generation of Britons have grown up only knowing Radio 1 as the mouthpiece for Moyles instead of the mediocre vehicle for the likes of Simon Bates it once was.

A UN spokesman said “Some say charities will benefit from this broadcast, but to paraphrase the gospel of St Matthew, what does it profit a charity if they gain millions of quid and it inflates the ego of some ghastly northern ballbag?

“I’m sure if you relayed the broadcast to an Ethiopian famine relief centre, explaining that the radio stays on while the rice gets delivered, they’d kick you out before you had enough for a half-decent risotto.”

A no-broadcast zone was ratified by the UN late yesterday evening, with France abstaining to vote on the grounds that their own national radio is so indescribably awful it would reek of hypocrisy.

Sources suggest that Moyles is already planning to escape to either Venezuala or Channel 4 where he has been offered another inexplicable run of unfiltered gobshiting.

But  Moyles has remained defiant, insisting “The plot to topple me has been hatched by teenaged dissidents taking hallucinogenic pills that make them think Comedy Dave isn’t funny.

“But I will continue to broadcast, house by house, room by room, and I will show no pity. No mercy. Now, here’s Jessie J with ‘Price Tag’.” 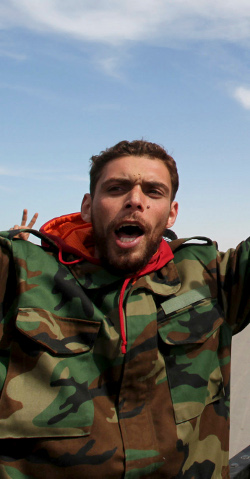 THE United Nations last night had its fingers crossed that the Libyan rebels it has just backed are not stark, raving lunatics.

After sanctioning military action against Colonel Gaddafi, British and US sources admitted they should probably have checked to make sure the anti-Gaddafi forces were in possession of at least a modicum of sanity.

A senior Foreign Office official said: “Everyone was speaking very quickly and we forgot to ask about their general mental health, what sort of things they believe in and whether they simply want to take over Libya so that they can fulfil their spiritual destiny of killing everyone in Europe with a sword.

“It’ll be fine. I can see no reason why it should turn out to be like absolutely everything else.”

A US state department source added: “It’s fair to say that our general dicking about in Muslim countries hasn’t always worked.

“We got rid of Saddam not realising that, as well as being a prick, he was also keeping the lid on a big basket full of fucknuts.

“And while Colonel Gaddafi is one of the great psychopaths of our time, he’s still not as mad as Mullah Omar, who if you remember got his start in the insanity business through the US-backed mujahideen.

“Nevertheless I’m sure one of my colleagues has already mapped out a post invasion strategy for Libya that won’t turn out to be a complete and utter piece of shit.”

Roy Hobbs, professor of doing the same thing over and over again at Reading University, said: “I have devised a simple multiple choice questionnaire which could be dropped on Benghazi this afternoon.

“If you come across an American in the desert would you:
a) Give him water, food and shelter as if he was one of your own;
b) Give him water but then pass by;
c) Cut off his head and pee on it?”

Meanwhile the UN resolution was opposed by German chancellor Angela Merkel who insisted ‘political pressure’ would topple Colonel Gaddafi in just the same way it was used to remove one of her troublesome predecessors.