Five types of office bellend you'd forgotten about during lockdown

OFFICE workers have been urged to go back in August, but you may have forgotten what bellends your colleagues are. Here are some you should mentally prepare for.

Every office has at least one person who thinks their role is to obstruct, hinder and delay. It’s unclear why they think they are being paid to stop work getting done, or what their moral objection is to just getting a f**king holiday rota sorted.

Woman with no tact whatsoever

Most people don’t just blurt out the first thought in their brain. Not this cow. She’ll happily tell a colleague, “You must be really depressed after your husband left you for that woman who works in Asda who’s old enough to be his mother, am I right, Linda?”

Too many varieties to list, but here are a few:

● Psychotic small business owner who thinks you taking a toilet break is stealing his money;

● Nobody middle manager who talks like he/she is Peter Jones/Deborah Meaden;

● Dreadful bully who would get decked or arrested if they behaved like that in a pub.

Many offices still have a group of males who exist in a 1990s time bubble when ‘laddism’ was allegedly cool and people read Maxim magazine. Like an Amazonian tribe that time forgot, they fervently discuss which female colleagues they would ‘do’, although their conversations with them never go further than ‘Awright, Lucy?’ as they arrive at work in the morning.

Is the weird guy Leslie who keeps himself to himself just browsing BBC News at lunchtime as he eats his tinned mackerel sandwiches, or is he looking up guns on the Dark Web? You will never know, but it’s probably best not to piss him off. 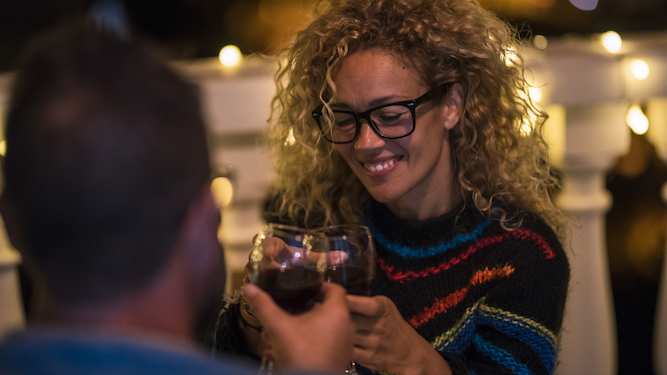 A WOMAN has alluringly confided in her date that she is going to the bathroom for a really big piss.

After sinking three glasses of Jacob’s Creek in 40 minutes, Lucy Parry whispered to date James Bates that she was just popping to the ladies for a humongous leak.

He said: “The date was going well and I was really attracted to Lucy. When she leant into my ear and dipped her voice to a low, husky tone, I could barely contain my excitement.

“So you can imagine my confusion when she said she was off to ‘urinate like a motherf**king racehorse’. Then as she sauntered to the bathroom she looked over her shoulder and shot me a wink.

“Is that some kind of code? Am I meant to do something now? Or are the flirtatiousness and having a wee unrelated? I’m incredibly turned on, and also afraid.”

Speaking over the hand dryer, Parry said: “I’m clearly drunk and didn’t plan that, but I think it either scared James off or put us on a new level of intimacy.

“If anything’s going to happen I need to ease off the wine. If I don’t I won’t get through sex without another wee break.”