DOES your mum believe she knows of a career option that would make you rich? She has no idea that these five jobs are just as badly paid as yours:

Has Jude Law been one in a thriller or something? Because she doesn’t know what they do but is convinced it’s glamorous, and brings up Sheila’s son who does logos and has a house in Spain. Swats aside that 90 per cent of them are freelance and make cock-all.

Barristers perhaps, high-flying corporate lawyers maybe, but your mother feels sure that becoming a solicitor would put you on a never-ending gravy train scooping up bundles of cash from boundary disputes. Reminds you that you dropped out of law A-level because there was ‘too much homework’.

Renzo Piano, architect of the Shard, is doubtless a rich man. But your mum never listens when you explain that after seven years of university most of them are planning three-bed new builds for a development in Staffordshire for less than what a mid-level HR Manager gets.

Definitely influenced by a Sunday night ITV crime drama, because she is convinced a reporting job on a local paper would swiftly take you to overturning wrongful murder convictions from a swanky Docklands flat, not earning Nando’s wages for writing about the success a local woman’s made of her floristry business.

When your mum hears ‘writer’, she cuts straight to J.K Rowling or Stephen King selling a million copies. Instead of thousands of flat-broke shitheads churning out SEO for a local plumbing company because they can’t get a £2,000 advance for their 1,000 page fantasy novel. 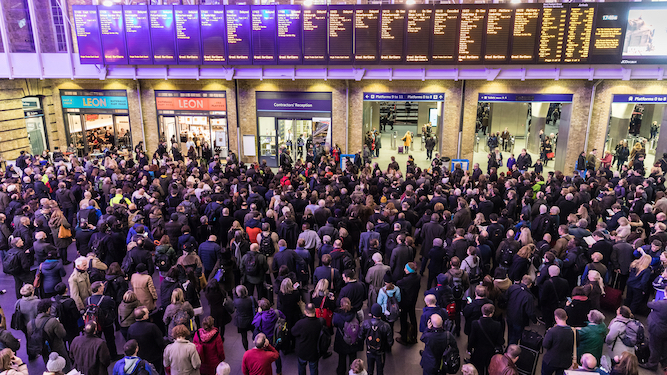 HORDES of commuters desperate to escape London before the rail strike are clinging to the last GWR Class 800 to leave King’s Cross, it has been confirmed.

The nine-carriage service departing from platform two was reserved for rail workers and RMT bosses, taking them to safety before the iron gates of the strike slammed down, but became overrun by feral office workers terrified of being stranded.

Requisitions head Martin Bishop, clutching onto carriage seven, said: “In less than 12 hours the only way out is the Megabus. I can’t survive that. I’m 55.

“The city will be in gridlock. There won’t be a plant-based chipotle burger available within two days. Only the strong and the Deliveroo bikers will survive.

“So I’m clinging to the side of the 1.35pm for the two hours until we reach Peterborough. If I jump just right I can get over the fence, bounce off the neighbours’ trampoline and land neatly on my own patio.”

Donna Sheridan, on the train’s roof, said: “I had to stamp on the hand of a woman with a baby to get this spot. She was swept away by the despairing crowds. No regrets.

“Couples have been torn asunder, families ripped apart, and because this line’s in the south it’s electrified so 1.5 kilovolts could rip through me at any second.

“Better than being trapped in London. I’ve got a coffee and I’m going to get my laptop out and get some work done.”