Why don't I feel Christmassy? asks woman who has to work all next week

A WOMAN who has to work all next week is wondering why she is not feeling even an inkling of festive spirit yet.

Due to Christmas Day falling on a Saturday, Nikki Hollis will be spending Christmas Eve in a 2022 marketing strategy review on Zoom with several colleagues that she hates.

Hollis said: “Christmas is the season of giving, but why the f**k do I have to give my precious time to mop up all the leftover work for the year, now that half the team has allegedly got Covid?

“I even have to spend the Christmas party on Wednesday afternoon sitting in front of a computer, thanks to Omicron. I’ll be sipping wine I bought myself and miserably making small talk instead of going to a local pub and getting inappropriately shitfaced on company money.

“Plus I won’t have time to go into town to admire the Christmas lights. Though I’m hoping that if I turn my screen brightness up full it will fill me with the same warm, festive glow while I’m filling in Donna’s performance review forms.

“Oh, who am I kidding? It’s going to be shit. But at least my boss won’t know my coffee mug is full of sherry.” 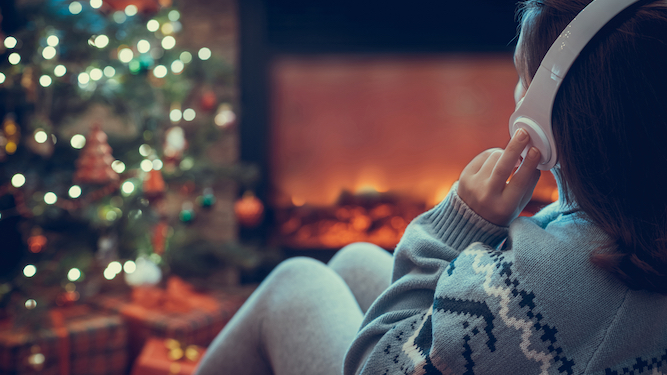 WHACKING on a Yuletide playlist seems like fun, but before you know it you’re listening to lyrics about war, suffering and death. Here are the gloomiest:

Do they Know it’s Christmas?

Band Aid raised a lot of money for a good cause, but this is a miserable song that features Bono hysterically screaming ‘well tonight thank god it’s them, instead of you’. That seems to be the kind of attitude that got us into a state of global inequality in the first place.

With all the fun of those ‘dub-a-dub-dum’s, it’s easy to forget that this one is about a First World War soldier writing to his girlfriend, who’s… in a nuclear fallout zone? Metaphorical eternal unknown soldiers engaged in endless war can kill the Christmas vibe a bit.

This one has a surfeit of entertaining ‘pa-rum-pum-pum-pum’s, but that’s hiding a song about a little boy so poor he has nothing to give the baby Jesus but his drumming. Not only is that pretty bleak, you’ll struggle to think of a worse birthday present for a baby than a small child with a drum kit. Mary would have kicked off.

Happy Xmas (War is Over)

Not only is he indirectly responsible for the celebrity Imagine video, Lennon is also to blame for that wonderfully festive lyric ‘Let’s hope it’s a good one, without any fear’. No one was associating Christmas with fear until you kept bringing it up, John.

It’s not just the depressing story of how the passage of time turns infatuation into bitterness, bickering and alcohol abuse. It’s also the fact that these ungrateful pricks are able to prance around in a bar on Christmas Eve without the slightest worry about Covid. They don’t know how good they have it.

Walking in the Air

Set to an already un-jolly tune, the melancholy voice of a tiny Aled Jones instantly causes flashbacks to the childhood trauma of watching a magical Snowman melt and die every Christmas Day for years. Plus it’s impossible to dance to.