A WOMAN has prepared a complicated lie about why she is late for work ‘because of the clocks’.

Helen Archer, who is frequently either late or off sick with some bullshit, told her line manager a rambling anecdote about time zones that she hoped was confusing enough to conceal that she was watching old episodes of First Dates until 3am.

Archer said: “My old phone changed the time automatically, but my new one doesn’t because it’s from Costa Rica and they don’t do daylight saving in Costa Rica. Did I not mention that time I went to Costa Rica?

“I also took a weekend trip to Antwerp, so I had to put the time back an hour when I landed back home. But I must have forgotten to put it forwards an hour when I took off, also someone told me the clocks don’t change in Belgium until next week, I think it’s to do with the mayonnaise industry.

“I actually got to work before anyone else did, but I had to go home again because nobody was here to let me in, and then the bus was late because the driver forgot about the clocks changing.

“Hope that clears that up. Now please excuse me, I need to go and waste another 30 minutes pretending to make a cup of tea.” 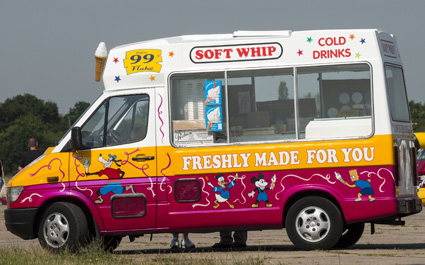 AN ICE cream van is still driving round like it is not nearly the end of f**king October.

Onlookers noticed the ice cream van in Weston-Super-Mare yesterday evening, despite the fact it was freezing cold and not an obvious time to think about having a Solero.

“But even I can see that with winter approaching it does seem weird, if not downright sinister.”

He added: “And in case you were wondering, yes, there are times when I do feel a bit like the Child Catcher from Chitty Chitty Bang Bang.”

Parent Norman Steele said: “It is a tad incongruous, but in fairness to the ice cream man, he does also sell knock-off baccy and pirated DVDs so I should pop out and say hello.”