There are music journalists who say that U2 are the greatest band of all time. This can prove embarrassing, especially when you have to pick up a gong at one of those glitzy music industry ceremonies and one of your peers says, ‘hey, Bono, I read that article about you being the greatest band of all time, and you know what? I have to agree with them’. Unfortunately that tends to happen a lot, but I manage to shrug it off as something I have to live with.

It seems our ambitious project to bring the story of Spiderman to Broadway is going tits-up. So we packed our bags and flew off to New York to see if we could rectify the problem. Because that’s what I do, I solve problems – be it making sure we’ve got the top three floors of the Four Seasons Hotel or ending the war in Darfur with the power of my eyes.

The musical looks like it’s going to need the odd tweak here and there. The Edge thinks it might be a good idea if we sort of lose the score we’ve written and instead replace it with the theme to the 1970s cartoon and play it on a loop. The other two people in the band seems to think it’s a good idea too. As you know U2 is a collective and all decisions are made democratically. But on this occasion I had to put my foot down for several reasons: number one – my idea is better, and number two – I don’t need another reason because the fact that my idea is better should be enough.

As someone who’s managed to reach the very peak of my craft, I feel it’s my duty to use my fame to try and influence those people in power. Just the other day, I called the British Prime Minister to have a chat with him and generally light a fire under his ass.

The conversation went something like this: “Hello is that David Cameron? David – it’s me, Bone, the rock star and social entrepreneur. As the Prime Minister could you take it upon yourself to ease the pain and suffering of the poor and the hungry by persuading the bankers, the industrialists and the billionaire landowners to donate some of their money? Yes, I do havea few quid in the bank myself, but it’s my job, Prime Minister, my job to tell the public that some people are really, really poor, and some people are really, really rich. Without my constant campaigning, Prime Minister, no-one would know this.” One ass fire well and truly ablaze. Thank you very much.

But I like Cameron. Not as good as Brown, but better than Blair. Blair thought he was Jesus. I hate people who think they’re Jesus.

People often say to me: “Bono, why don’t you just put your hand in your pocket and donate more money yourself – you can afford it?” This is, of course, an extremely naive assumption. My role is as a visionary, a social engineer, I raise awareness.

Plus it would totally fuck up my accountant’s tax strategy, 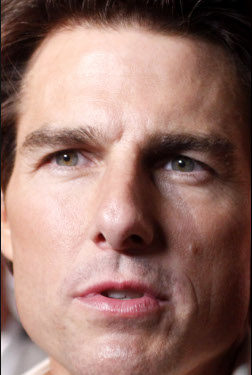 The scientific world is a buzz with news of all the exciting things we’re going to do to the human body in the coming decade. Imagine you could have the eyes of a chameleon grafted onto your face and were able to swivel them independently of each other. You’d finally have achieved that ‘Lloyd Webber’ effect youâ€™d always desired, except sexier – and you’d add a whole new dimension to otherwise pointless workouts at the gym. Procedures like this sound rather complicated but in fact it’s pretty easy to understand if you can just remember the timeless lads’ night staple Cocktail starring an impossibly youthful Tom Cruise. In this film, Tom has to select from an intimidating array of exotic liqueurs in order to mix up the perfect tipple so that he may summon the attention of his female friend. It really is an emotional rollercoaster but it’s not a far cry from what we guys at The Institute’s Human Tissue Technologies lab are doing with your body parts.

Let’s say that Tom no longer wants to rustle up a delicious French Martini but a functioning human kidney. Instead of a dash of Chambord and a twist of lemon, he instead squirts living human cells into his little vessel, which is not so much a cocktail shaker as a gelatinous kidney shaped mould. And after it’s all been prepared, he doesn’t so much present the fabulous concoction to his alcoholic lady friend for approval, but implant it directly into her body where it immediately sets about filtering her urine.

And it’s not just kidneys: we have already achieved hearts, arteries and various other ingenious conceptions in our labs. In fact, the next time you’re at the movies, take a closer look at Angelina Jolie’s veiny forearms and you’ll immediately recognise a precise route map of the breathtaking Cote d’Azur region of France – something which she didn’t request upon her vein replacement consultation but I’m sure she is now grateful for when she makes her annual road trip to the Cannes Film Festival.

Undeniably, it’s wonderful news for all of us, but in particular for the Dancing on Ice star, Heather Mills who at some point this decade, may be able to grow herself a new leg for skating and lashing out with. In fact, advances may be such that scientists could graft almost anything onto Heather’s stump – at her consultation I might recommend a glamorous rotating mirror ball or perhaps a Kindle because they really are marvellous.