Anyway, as I was saying, things are really, really exciting at the moment because following on from the mega success of my fragrance Stunning, I'm going to be launching my own cooking oil. The idea came to me when I was frying Peter's breakfast the other morning. I said to him "this cooking oil smells shit – I wish it smelt of something nice like Katie Price’s Stunning, instead". Peter looked up from his mobile and said, "what’s text shorthand for 'an'", before agreeing with me that cooking oil smells shit and that everyone would be happier if their sausages and bacon smelt of Katie Price's Stunning. So I phoned my agent Lucy, who put the wheels in motion.

Lucy is well excited about my cooking oil idea. The only problem she sees is perhaps some knobhead might try and fry an egg in my perfume and splash cooking oil over themselves before going out on the razz. Still, that's not my fucking problem, is it?

The worstest thing about being famous is the fact that people – mostly blokes – look at you, not in the eye like what a real man like my Peter would. No, they look downwards as if they're ashamed to look at me in the eye – I experienced this the other day when four builders looked at me, but once again – where did they all look? You’ve guessed it. What are they – cowards? Of course they're cowards, they don't look into my eyes because they know that I'm a threat to their manly hoods. As they said in issue 137 of OK! Magazine, 'Katie Price Is A Powerful Female Ikeacon'.

I'm in the middle of writing my seventh book. I had a meeting with my publisher bloke today, and I must admit I got the right hump with him. He wanted me to call it 'An Autobiography'. "That's the same title as my Peter's book you fucking twat," I told him. What he don't understand is the fact that our fans might get confused and buy the wrong one. Publisher bloke may have gone to Cambridge University in Oxford but fuck me, he ain't got a clue – like my Mum said, people who go to university may be intelligent but they're still fucking scum. Besides, I'm the one who's worth £17m, and he's the one who dresses like my nonce of a geography teacher and cycles to work – so who's the clever one now, hey? With this in mind, I stood my ground by telling him that I was going to call my book something different. So I came up with the really brilliant title, Katie Price: My  Story – Not An Autobiography. He started huffing and puffing a bit, before agreeing that I was right, and he was wrong.

I’m not one for self-publicity and all that, but this week I’ve been forced by Lucy to go to seven film premieres and make twelve PAs. All those people who say our wedding is a sham should take note of the commitment I've made to Peter – I only give out blow jobs to A-List actors at film premieres nowadays, whereas in the past I could be a right old tart. The one I went to this afternoon was fucking horrible – the bloke who directed it insisted the celebs sat through the entire fucking film. I wouldn’t mind if it was Pirates of The Penzance III or that one with the four-eyed kid who does magic tricks, but this was sooooooo boring. For a start it was in a foreign language, had subtitles and went on for fucking yonks. I had a right go at some bloke sitting next to me who kept telling me to shut up – "Hello!" I said, "haven’t you ever heard anyone read before". Fucking wally. 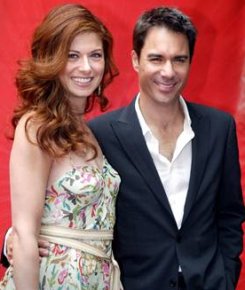 THE definition of the moment of death is to be redrawn to include anyone watching the cable television channel LivingTV, doctors announced last night.

At the moment people are only classified as being dead when doctors decide that all activity in the brain has ceased or if it takes them longer than four minutes to complete the quick crossword in the Sun.

However, hospital tests confirm that this state of ‘brain death’ also occurs while watching Paranormal Egypt, Most Haunted, Just Jade and Extreme Celebrity Yo Yo Dieting, the doctors said.

Dr Wayne Hayes, head of medical ethics at the University of Dundee, said he would have no qualms about removing the vital organs of anyone who was sitting on a sofa viewing Britain’s Next Top Model, Grey’s Anatomy, or any of the later series of Will and Grace.

He said: “It is important we doctors have a strict definition of when a patient is dead so that we know when to start harvesting their organs. There is nothing worse than having to put someone’s brain back in after having taken it out, there is always one fiddly bit left on the side which you only discover after you’ve put the lid on and screwed it down.

“The advantage of this new system is the removal of all doubt. We can say with absolute certainty that all brain function has ceased once LivingTV is on. But we still have to move fast. There is no point harvesting a brain at the end of an episode of Extreme Makeover UK as by then it’s just useless.”

If latest redefinition of brain death proves successful there are plans to expand it further to include viewers of Richard and Judy on Channel Four, and then Richard and Judy themselves, although the latter would be preserved in specimen jars in a museum and not used as organ donors.

“The idea that Richard or Judy might live on in any way in another form is just to horrible to contemplate,” said Dr Hayes.