THIS week finds me in the Antipodean paradise of New Zealand, whose stunning landscapes were the inspiration for JRR Tolkien's Lord of the Rings Trilogy.

This is just the kind of relaxing break I need after my recent fatal drugs overdose and I would heartily recommend it to anyone who requires this particular type of convalescence.  There is just something so pure and healthy about the air here – I can totally understand why the Kiwis are so good at rugby and why those Hobbits were able to rescue Middle Earth from almost certain doom.

Relaxing in the picturesque meadows of Matamata (or, as we cognoscenti refer to it, 'The Shire') I feel a million miles away from the Sydney train toilet I woke up in after being turned away from DJ Rico's set on Darling Harbour and my resultant disastrous overdose on hashcakes. Normally, I can smoke bales of Mary-Joanna and still have the mental agility to ride my bicycle to Singh's General Stores and conduct small talk with Mr Singh. However, on this occasion, I can only assume that I was spiked – no doubt with horse tranquillisers or dog worming tablets (that kind of thing goes on all the time in Australia). But here in NZ, there isn't a worm in sight and the people are just so simple and unassuming.

I only wish that DJ Rico was here with me to experience them and the rocky behemoths that are the famed mountains of Edoras. He shares my love for Tolkien, as I discovered during our night of sexual communion and talking about books. I asked him what character he most identified with from 'Lord Of' and he said Aragorn because he was so brooding and swarthy. You might be surprised to learn that I am not Frodo (the obvious choice), but his trusty hobbit companion, Merry. This is because I am not all out there and in your face like Frodo, and because Merry also starred in the TV series Lost, and sometimes I just feel so 'Lost'.

So it's on with my quest to find myself and my decks-alchemist love, DJ Rico. In our most intimate moment together, he told me the one thing he never tells anyone else: his real name. It was Richard. I could marry a man with that kind of name – or Rico, or Humphrey or Arse-Bandit or whatever because names don't matter when you've found love like that.

It's the nature of the Kiwi to hold a mirror up to the soul of man; something about this place forces you to shift down a gear and see things you wouldn't normally see – 'visions' you might say. You might always have thought you were Arwen, the Elfin beauty, only to find out you're actually Gimli, the Scottish dwarf who plaits his beard. That is what makes New Zealand the greatest country in the world.

Fat Gene Made My Baby Explode 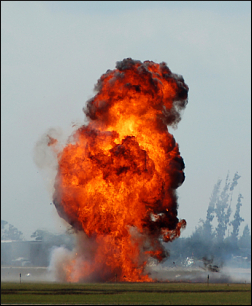 ANGRY parents are demanding compensation after an obesity gene made them feed their children until they popped.

Experts say the gene not only prevents hefty children from telling when they are full, but also forces their parents to give them bucket after bucket of chips and fried meat.

A recent study, published in the Journal of Clinical Roly-Poliness, found the 'FTO' gene means a porky child is less likely to have its appetite 'switched off', while the parents are more likely to be a pair of total retards.

Elaine Reeves, from Chesterfield, had been shoving cake into her delighted, but chubby eight year-old since he was a toddler.

"He'd had his tea and his dinner and was just sitting down to supper. He liked cake, so I always gave him loads and loads of cake.

"I'd nipped into the garden to slaughter a pig when I heard this big bang. I looked in the window and there were just bits of cake and Man Utd shirt everywhere."

She added: "Doctor said his genes were all wonky. He was my brave little 168-pound soldier."

But geneticist Dr Wayne Hayes said: "The thing about children is, they're children. And you're not. You are in charge of them.

"This means that when your child develops the look and feel of a bean bag, it's probably time to put down the shovel."