I dreamed of following in the footsteps of crotchety Mongoloid trouble-maker, Genghis Khan. But I was really rather disappointed with what I found. For a start, Ulan Bator is surprisingly low on cannibals and many of the men don't even have beards. Not even the smattering of dirt that covers most things could cheer me up. And it got even worse when I arrived at the Mighty Khan guest house in the centre of town and found it crammed with brawny American students. This was NOT what I had in mind. I thought things had perked up when I heard a disgruntled local getting things off his chest with a spot of throat-singing out the back of the bin house, but it turned out it was just a pissed Frenchman being sick.

The next day, I got on a bus for outer Mongolia, only alighting when I saw a goat in the road. This was more like it! The streets were utterly filthy and the locals looked pretty much suicidal as they trudged around in the snow. I finally found a place that sold food, where I could have my authentic taste of Mongolia.  But instead of bison balls or some other gruesome snack that Genghis might've enjoyed, the old lady gave me a bowl of hot water with a piece of onion in it. The final straw came when she pointed at the bowl and proclaimed it 'Americanski soup!'. Was she drunk? No wonder Genghis was so furious all the time. Now I totally understand why he ate all those people.

Back at the hostel, I asked the Americans if they'd discovered the real Mongolia. I learned that they'd come to Ulan Bator on the Trans Siberian Express. The journey had taken two whole weeks of boozing to stay alive plus they'd eaten a yak! I HAD to go back with them. "You'll need a Russian visa!" they said. "Coming right up!" I replied. But when I went to the visa office at the train station, the woman wandered off into the backroom as soon as I said 'Hello'. I rang the bell for about 20 minutes and then she came back and hissed, "Go away, stupid foreigner!".

I don't get it. Are all people from Mongolia such mannerless crusties who run around misrepresenting America and its many soups? They'll be laughing on the other side of their bizarre little faces when the whole country gets nuked by nearby North Korea. And that is what makes North Korea the greatest country in the world.

Make Goodwin Give Back His Pension, Brown Tells Obama 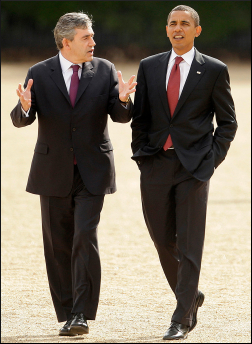 GORDON Brown will today ask Barak Obama to make that horrid Fred Goodwin give his pension back.

The prime minister will urge the US president to use his famous charm on the former RBS executive, or failing that, torture.

Mr Brown said: "Let's at least try the charm. Maybe they could go for lunch and the president could flash that lovely smile and call him 'the Fredster' and if that doesn't work then the CIA could shove a black bag over his head and throw him in the back of a van.

"Of course, as a member of the British government I've no idea what would happen next, though I did read an article somewhere about water and electrodes and I think there might have been something about testicles."

Mr Brown said his first summit meeting with President Obama was a vital stage in the development of a new global understanding of why Fred Goodwin should not get that pension.

He added: "Before I came here I consulted with my EU counterparts as well as the leaders of Japan, Russia, Brazil, India, China, Israel, Iraq and Afghanistan and they all said the top priority was getting at least £8 million back, if not 10."

Meanwhile chancellor Alistair Darling has admitted the financial crisis was the result of a 'collective failure' that may or may not have included certain politicians.

He added: "Maybe someone who has a lot of experience at the Treasury. Someone who is Scottish, likes Raith Rovers, has this weird jutting jaw thing going on, only has one eye, are you with me yet?"