One Woman’s Week: Evolution On The Number 9

IT'S hard times we're living in when the weaker members of our society are being picked off like fleas on a scabby dog. I'm talking of course about swine flu. I can only thank God that I am a fit and attractive young woman who will never burden our frankly stupid NHS.

There are many measures I take to keep myself free of disease, including never touching other people in any way and always wiping from front to back. People often say to me, 'But Karen, you work in a school. How do you do it?'. I tell them my classroom is a tightly run ship, where the pupils know not to get too close to Miss Fenessey (unless they've been given a special 'visa'). I also fully train them in the 'three rules', which if you don't already know then you must be living on a farm and probably already have swine flu: Catch it! Bin it! Kill it!

However, I learned even more about this condition when I accompanied my pregnant sister to her check-up at the antenatal clinic. Apparently, the pregnant are especially vulnerable and are first in line for the vaccine – ahead of other special needs groups such as the elderly, who are actually behind regular adults. Fascinating! My sister can't grasp such concepts and got excited about 'hearing the baby's heartbeat'. (I wanted to grab her and say: "For God's sake, Michael Winner's got a heartbeat but it doesn't make me go 'oooooh!'").

Anyway, I was able to implement my knowledge on the bus on the way home. All the seats were taken so my sister and I were forced to stand. A gentleman at the front got up, not for my huge relative, but for an old woman. My sense of injustice was further inflamed when the old lady sneezed and then failed to 'Catch It'.

"Excuse me," I said, "But I think you'll find that my sister needs this seat more than you." My sister became irrational, insisting she didn't want to sit down and so I was forced to remind her about her hormones. The old woman croaked something about arthritis. "Arthritis?" I scoffed, "My sister isn't even married!" At this point, even the self-absorbed geriatric understood the situation and duly vacated. "And by the way," I whispered, so as not to embarrass her, "The first rule of swine flu is to Catch It!"

"But I don't want to catch it. My neighbour caught it and got diarrhea." She was obviously senile. I immediately made my sister wash her hands and face with antiseptic alcohol gel, which I had thoughtfully brought along.

It's at times like this that I like to invoke the prophecies of Charles Darwin about survival of the fittest. If everyone was able to embrace this complex theory instead of demonising poor Charles as a heretic, there wouldn't be any disease and humans could one day inherit the earth. 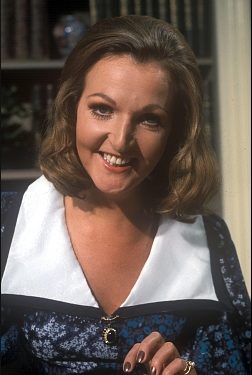 VENEZUELAN President Hugo Chavez has banned all material relating to Felicity Kendal, describing her as 'the ultimate sex totem of the idle bourgeoisie'. Don't get him started on Penelope Keith

The socialist firebrand has issued a decree condeming the British actress as a 'doe-eyed bauble of the fat Western capitalist'.

He added: "Do not be fooled by the muddy dungarees she so coyly sports when pretending to dig her sprout patch with Richard Briers. It is not befitting for the working men of our nation to covet her, however winsome she may be."

Since the ban, bootleg VHS copies of The Good Life, Rosemary & Thyme and the early 1980s comedy drama Solo have been changing hands at Caracas street markets for enough money to feed a family of 14 for a year.

Street vendor, Miguel Hernandez, said: "Our leader has alienated his people. For many life here is very hard, and the thought of Felicity Kendal wearing nothing but a thin nighty made of home-grown spinach is what keeps us going."

The Venezuelan leader also faces accusations of hypocrisy for refusing to legislate on the films of Jenny Agutter, who is claimed by sources close to the president to be a personal favourite, despite offering a similar brand of posh sauciness.

But Chavez insisted: "The issue of Agutter is quite different. Walkabout is packed with socialist subtext, especially the bit where she bathes in the watering hole as the sunlight shimmers off her lithe, rippling body.

"Same with the one where she shags a werewolf in the shower. Marx could have written that."