Men Win Right To Watch Women Have A Sweaty Fight

MEN have won the right to watch two women have a sweaty fight as long as one of them gets to listen to her national anthem at the end. Just so's you know, they will not look like this

The International Olympic Committee agreed that women punching each other was 'more Olympic' than karate because the competitors would be wearing tight-fitting vests rather than baggy pyjamas.

Girl fights had previously been banned from the event amid claims that while two slim, toned, sweaty women going at each other was obviously worth watching, it was not necessarily a sport.

Advice is now being sought from rhythmic gymnastics experts on how to judge the all-women bouts while hiding a straining erection. A London 2012 spokesman said: "I think the main thing will be to make sure we can see the judges' hands at all times."

The IOC also said girl fights would help make the Olympics more relevant to the East End of London.

Training is already under way in the boroughs of Greenwich and Stratford, with the best medal prospects being told their opponents gave their boyfriends a hand-shandy behind the Odeon.

Meanwhile community activists stressed that if East End women were beating each other up, it would give local men more time to embellish their West Ham tattoos and hand out BNP leaflets.

Girl fight campaigner, Holly Turnbull, said "It's been a long and difficult battle, not least to stop the IOC using the words 'foxy' and 'Angel Delight' at every meeting.

"It's taken took two years for them to agree that we wouldn't have to wear six-inch stilletos and skimpy, leather hotpants."

She added: "Part of our strategy was to show them Million Dollar Baby, although obviously we switched it off before she gets crippled and Clint Eastwood kills her. 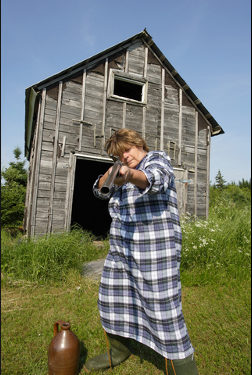 FAT, stupid Americans with no health insurance have attacked plans to stop them dying so easily. Across the United States poor people who are told what to think by television said President Obama's plan to give them free healthcare could lead to them being treated in a hospital that was not run by the Chicago Mafia.

Bill McKay, a retired shitkicker and Fox News analyst, from Kentucky, said: "I would rather replace my own hip using a rusty spoon than wait two months to have it done in a communist hospital, by some coffee-coloured faggot doctor who will then eat my unborn child to celebrate the end of Ramadan."

Barbara Hayes, a God-fearer, from Arkansas, added: "Ah see'd some woman from England on the Fox News sayin' her muslim communist doctor would only give her the good medicines if she denounced Jesus. Ah ain't denouncin' Jesus fir nobody, no siree."

But Dr Tom Logan, head of public health at the Institute for Studies, said: "The key difference between the United States and Britain is that we treat poor people rather than leaving them to die in a skip.

"It may take a few weeks or even months, and not everyone is happy about that, but we do at least all agree that it is marginally better than the skip."

He added: "Rich people have a thing called 'BUPA'. No-one knows what it stands for, though some people say it sounds as if it might be Indian. But it does mean you get your own room, quick treatment, nice food, and you get fawned over by nurses who were just that bit too sexy for the NHS."

A Conservative spokesman said: "We're not really sure what Daniel Hannan's problem is with the NHS. Perhaps they were unable to save his hair."

Stephen Malley, professor of American History at Reading University, added: "To be fair to Fox News and the Republicans, they do have a principled objection to socialised medicine based largely on the fact that a black man won the election.

"The thing you must always remember about the American right wing is that they are basically the baddies in a film."