One Woman&#8217;s Week: Visions Of A Better Society

I’m sure many people have bad days at work but I guarantee no one has suffered the catalogue of errors that took place in my classroom yesterday. This is what happens when you take a stand against the most disgusting people in our society: RACISTS! Also, I may need an eye test.

It goes without saying that all racists should be punished by flogging, but this is particularly true for the racist juvenile. The latest addition to my P2 class is Fatima from Saudi Arabia, who took an irrational dislike to our little Pakistani pupil, Asma. At least, I thought stapling a Penguin wrapper to her ear and calling her a ‘dirty, dirty Pakistani’ was somewhat irrational.

“How dare you be racist in my classroom!” I said. “How would you like it if I called you a ‘camel-jockey’ or – and I can’t even bring myself to say this word so I’ll write it on the board.”

Just as I had finished writing ‘sand-n****r’ my lesson was interrupted by the unexpected entrance of the head teacher, Mrs Dixon. “Miss Fenessey,” she yelled, “What the heck is going on here?” As I struggled for something to say, young Asma piped up: “Fatima wrote it. She said Miss Fenessey was a sand n****r”. Mrs Dixon didn’t look convinced so she asked Oliver Templeton-Lauder what had really happened. “Yes, what Asma said,” Ollie confirmed. It’s this sort of inter-racial co-operation that makes teaching so worthwhile. What's more Fatima was soon crying like a total baby and when Mrs Dixon called her mother to come and pick her up, it felt like Christmas!

You might think I’d had a lucky escape, but the day was not over yet. Recently, I’ve had some problems with my long-distance vision (a fact I attribute to lethal X-rays emanating from Donny’s silly new Wii machine) and so, at the gates, I left Fatima with the short figure in green and black who I took to be her hijabed mother, but later turned out to be a wheelie bin.

If you ask me, long, flowing cloaks in this day and age are just bloody confusing and are fit only for flashers and wizards. So now Mrs Dixon has blown her lid again because some interfering moron got the police involved.

When I think about the sacrifices I make protecting humanity in today’s classroom, my blood boils. Especially when you compare it with the excessive behaviour of Middle Eastern people who just can’t let things lie. 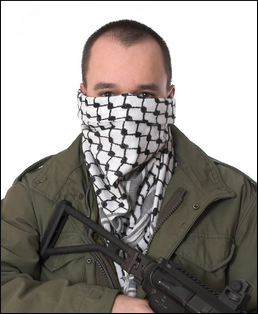 MILLIONS of people across the UK are hoping to earn up to £3000 a day by pretending to be a terrorist.

With the government offering generous compensation to anyone held without charge for more than 28 days, enterprising Britons are already getting up to speed with key Jihadist phrases.

Would-be fake maniac Wayne Hayes, a shopfitter from Swindon, said: "I'm just going to wander into my local police station and say, 'I think I might be a terrorist'.

"Then, at the stroke of midnight on the 29th day I'll say, 'actually, I don't think I'm a terrorist after all'. Ker-ching!"

He added: "I'm sure some people will keep it going for the full 42 days, but I can only get four weeks off work."

Hayes is already surfing Jihadist websites and has placed two small Calor gas canisters in the boot of his Jeep Cherokee.

"I bought them for the barbecue, but we hardly ever use it, so I may as well pretend to be planning an attack on Bristol airport."

Bill McKay, a civil engineer from Leeds, said: "I'm going to get my neighbours involved. Get them to say things like, 'he's been very angry about Palestine recently and seems to have made a lot of strange new friends'."

He added: "We'd really like to put in a conservatory this year, so I reckon I'll need about 33 days."