IF you look at my before and afters, I think youll agree I have gone from knackered old king, to fabulous young thing. When I see pictures of myself 500 years ago, I can’t believe I went out looking like that. Super constipated! Whatever battles we fought, we were always going to lose the style war because there were no really well-groomed men to inspire us. But I’ve been working with some amazing stylists lately and am now precisely as handsome as Will Young.

There is one crucial difference though: when Will faced his nemesis, Gareth Gates, in the final of Pop Idol, he made sure he’d had a Yakult and a bottle of Evian. On the day I faced Henry VII at Bosworth, Id eaten a block of butter and washed my face in my own urine. As you can imagine, this made my skin tight and lacklustre. The rest is history: I went on to have a mammoth series of bad hair days, over time becoming putrid, grey, lifeless. Hashtag Undateable!

Skincare aside, you’re going to need drapes for that royal bod. If, like me, you’re blessed with the svelte waist line of Cameron D or 1970s David Bowie, you can own pretty much any look. Here (right) youll see Ive gone for a sleek jaw length bob (Im thinking Uma’s signature Pulp Fiction do) and a marvellous hat to really make them gasp.

Now youre ready to strike that pose, girlfriend! Turn your body 30 degrees, stick one hip out, slouch one shoulder, curve up from the waist – then flash that winning smile. Youve seen Tulisa rock this move on the red carpet – now you can do it at the bus stop, the office, outside the gents  anywhere it’s not slippy underfoot. Just make don’t overdo it, or you’ll end up with a permanently bent spine and squint shoulders (just sayin ;)). 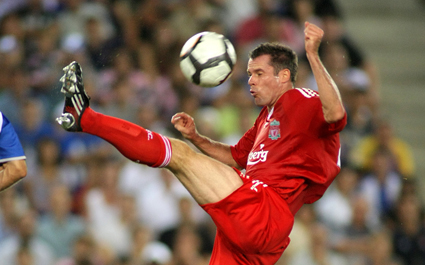 JAMIE Carragher will retire at the end of this season to become Britain’s most sought-after vocal performer.

Chanel, Jaguar and Armani have offered six-figure sums to have the meandering Liverpool defender lend his high-frequency tones to their ad campaigns, while animation giant Pixar has asked him to play a slow-witted octopus in Finding Nemo 2.

“People are tired of Rob Brydon’s measured, friendly timbre and they want somebody who sounds like a fax machine having an argument in a tuba full of phlegm.”