One woman’s week, with Karen Fenessey
The ridiculous Katie Holmes is back in the papers because she crashed into a sanitation truck while driving Suri home from gym tots. Influenced by goblins on strings

This never would have happened under Tom’s watch: he would have recruited a capable driver such as his mother or John Travolta.

People say unfair things about Tom Cruise: he’s a psychopath, he sits down with aliens, he has a drawer marked ‘Phone Chargers’ where he keeps a collection of strange, gently burring devices. But so what? Men like Tom work inhumanely long hours and need to stay in control.

Brave Tom selected Katie out of every single woman in the world to be the winner. Not stopping there, he used his brain to erase all traces of her pitiful ‘Joey’ existence, barred her D-List friends from coming over, set her free from the acting career she was so inept at, let her go to his glamorous film premieres and changed her name from Katie (my neighbour’s dog’s name) to Kate (I’m thinking ‘Middleton’).

The problem is, Katie spent the 80s watching idiotic kiddie film, Labyrinth instead of gritty war drama, Top Gun. While we were learning Tom Cruise could French kiss any woman he chose, even if she was his rank superior and a lesbian, she was learning that if the Goblin King came along in silver jeggings and sorted your life out. You could selfishly toss all the gallant gestures and magic dancing back in his face by wistfully murmuring ‘You have no power over me’, and David Bowie would be sad and confused.

Instead of showing gratitude, Katie spent her time wandering around New York in pyjamas, carrying her dwarf sized daughter around like some kind of yappy dog or BFF. How was Tom supposed to stay enthusiastic about a woman whose skin had turned grey, who never said thank you, whose eyes were beginning to stare off in different directions and whose buttocks could slice a man’s leg off?

Now she’s got her lipstick and heels back on, pretending she’s the one who’s in charge – I for one can’t wait to see her taken down. Through his many varied roles, Tom has amassed a vocabulary of over 8 billion words so don’t think he can’t defend himself using combinations of these or, as necessity dictates, ethereal mind control/physical manipulation. Tom will always seek to reason with the lady verbally, as he did with Matt Lauer on the Today Show, before moving to brute force – he’s nothing if not metrosexual. Mercifully, Katie will not be able to bully him anymore.

Katie Holmes: no one likes you, not even your own mum, so do us a favour and have yourself lobotomised before you kill any more bin men.

UK to intervene on both sides of Syria conflict 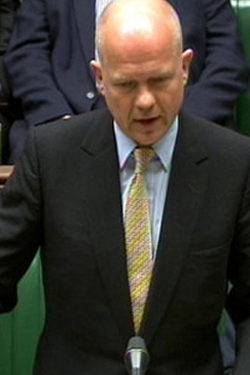 BRITAIN is to simultaneously help both sides in Syria’s bloody civil war, it has emerged. It's a classic win/win war situation

The Foreign Office cited Assad’s strong trading links with the UK and his nice-looking British wife as the reason to stand by him, and the regimes brutal repression and shelling of civilians as the moral case for backing the rebels.

Foreign Secretary William Hague said: We also need cheap crude oil for multinational businesses who may deign to give us a tiny slice of their profits in tax, but at the same time UK voters are starting to notice the rampant destruction now the football’s over.

“People at home are watching reports and getting increasingly concerned the conflict may escalate to special ‘war news’ and spill over into other telly like TOWIE.

“So we’ve divvied things up, with the Assad regime getting the air support and the tracksuit-clad rebels getting the arms to shoot them down with.

Prime Minister David Cameron said: This is the kind of diplomatic brilliance that my brand of compassionate conservatism brings to the international stage.

Can any of us really say that we understand an Arab regime, with all those Sunnis and Shias and so on? Whats important is that we act decisively.