A CIVIL service co-worker has visited Jacob Rees-Mogg’s desk while he was absent and left him a little message.

Following reports of the Cabinet minister leaving notes reading ‘sorry you were out when I visited’ notes on Whitehall desks, a colleague popped over to see the minister for Brexit opportunities and government efficiency to find him not present.

The anonymous civil servant said: “What an irony it was for me that Rees-Mogg wasn’t at his desk, probably because he was out visiting the empty desks of others. And what an opportunity.

“Sadly I hadn’t brought a pre-printed notice with the governmental crest and my full job title with me, unlike him. In fact I didn’t even have a pen and paper. So I had to improvise.

“Quickly I hit on a way of leaving a message that would tell him I’d been at his desk and my feelings toward him swiftly, efficiently and without room for misunderstanding.

“I climbed aboard his leather-topped desk and authored my communication. Unfortunately there’s no way he’ll know who it’s from, because so many of us feel the same, but I trust there’s no doubt as to its meaning.”

Rees-Mogg said: “What’s this on my desk..? Oh ho ho. Looks like Boris has been by. That Old Etonian sense of humour is unmistakable.” 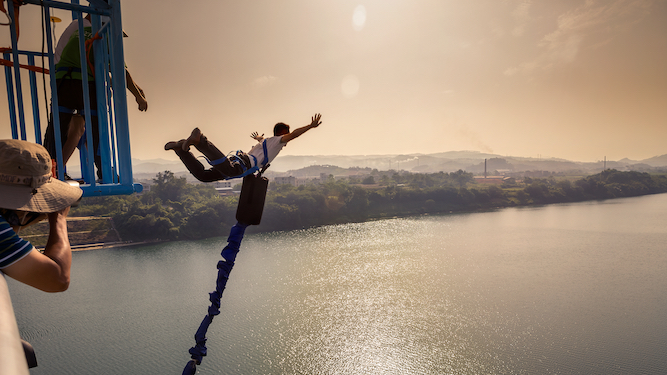 SOME wanker’s always trying to get you to watch this or try this or go doing that. You nod and say ‘I really should’ while intending to do no such f**king thing.

It’s the greatest show ever but it’s also 86 hours long. You’re not signing up to a year’s watching just because your mate’s evangelising about it. He thinks his girlfriend’s fun and nobody’s noticed his hair loss. He’s wrong.

Christ, people love sushi. Their eyes roll back in their heads. But you’re not that keen on fish, you’re kind of averse to raw meat and honestly you can live a good, full life without a California roll passing your lips.

Go for a dawn run

Being up while the world sleeps, seeing the golden rays of dawn break over the hills, beginning the day charged and pumped – none of it’s worth getting out of bed for.

First, your life’s alright. Second, the book in question seems to have changed the life in question into something of a dick’s life. Third, you can’t even be arsed to read books you want to read.

Listen to a playlist

It’s sweet that your mate spends hours curating their special playlist full of all their favourite music, but you’re not listening to that shit. They’d only ask you about it and you’d have to bluff. Just go to ‘all liked songs’ and shuffle.

Spending a whole evening watching a movie that Charlie at work says is unmissable? That’s won Oscars and has incredible reviews? Or just say you have, scan the Wikipedia, and get pissed instead?

Or paragliding or bungee jumping or whatever. There’s a time for flooding the bloodstream with adrenaline and it’s when you’re in serious danger. Don’t simulate it.

Comics are for kids, yeah? Words and pictures are for people who struggle intellectually, like readers of Heat magazine. You’re not reading some crappy comic. You’re an adult.

It’s probably amazing, but it’s also on telly. It’s comprehensively on telly. So while you are missing out, you’re missing out on a limited amount and don’t have to shit in a trench.

F**k off trying to make people jump in a freezing lake. It’s perfectly obvious they don’t want to. Swimming pools exist for a reason.

There’s this YouTube video your mate wants you to watch? And it’s three minutes long but he’ll be there the whole time. Those minutes will be hours. F**k that.