Dear Boris, when I called you a 'lying sack of shit' I may have spoken in haste

As a loyal Tory MP, I feel I should make it clear that when I referred to you as a ‘lying sack of shit’, a ‘f**king liability’ and a ‘dead man walking’, I was only kidding.

I can’t help but notice you’re still hanging on, so I want you to know comments like ‘Let’s get the fat, incompetent pisshead out’ were just an ill-judged and frankly pathetic attempt at irony. Yes. That’s what it was. Irony.

Even though it was just a joke, consider this a full and unreserved apology. Please suggest a convenient time for me to come over to Downing Street, grovel on all fours and lick your shoes. It’s the very least I can do.

It’s not as if I’m some jumped-up little nobody who’d stand no chance of being an MP without Brexit appealing to my gullible, racist constituents. They’re not fools who’d vote for a dog turd if it supported Brexit, although I wouldn’t like to test that theory.

I’d implore you not to take swift, brutal revenge and sack me like you did the Tory Remainers. I love people being forced to listen to my petty, intolerant opinions, and my wife’s getting a luxury kitchen on my MP’s expenses.

Please. I’m begging you. I’m just a former middle manager whose only political skill is spouting rabble-rousing patriotic bullshit, like last week when I wasted the Commons’ time by demanding supermarket staff sing ‘Rule Britannia’ when they open every morning.

If I did say anything to offend you, it was probably just the after-work beers talking. We’ve all been there, right, mate? No seriously, I’ll announce I’m a hopeless alcoholic if you want. Just don’t sack me. I’ll do anything.

D’you want money? I can give you money. Say how much. I’ll do it now. 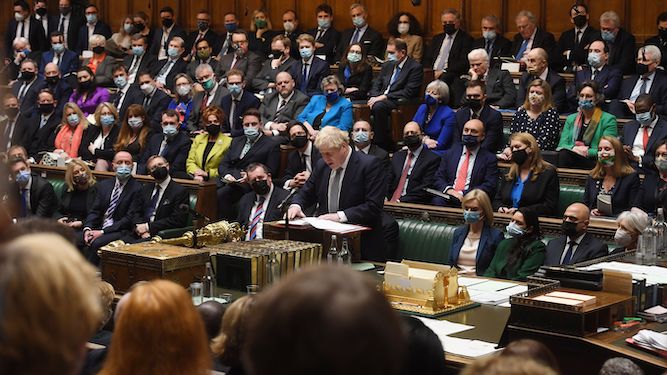 A CONSERVATIVE MP has crossed the floor sides just in time to enjoy the downfall of his former party.

Bury South member Christian Wakeford, a keen Christian and wakeboarder, got to watch today’s doomed prime ministerial bluster from the comfort of the opposition benches and really had a great time.

He said: “It’s been great being a Tory, getting elected and Brexit and all that, but for me these parties have taken the fun out of it. Ironically.

“I really wasn’t getting a buzz being in a government that’s crashing and burning to protect one lying dickhead’s irredeemably trashed reputation. But Labour were loving it.

“So I thought why not switch teams, get over there on the happy side, and really savour the annihilation of all those venal pigs-in-trough bastards who were my respected colleagues yesterday?

“When Angela Rayner was waving bye-bye I was pissing myself. These guys are a great bunch. We’ve got the next election on lock.”

He added: “I still get paid the same for three years so who gives a f**k?”