Dear Donna: I compulsively dress as a builder whenever I'm in trouble. Is this normal?

I can’t stop myself dressing like a builder. The moment I’m in trouble, which is a lot, I sneak off and put on my hi-viz and hard hat. Is this normal?

I can’t help myself. I’m in the Commons taking questions and all I can think about is how comforting it will be when I slip into my steel-toed boots later. It’s an obsession.

It only started because I was doing it for work, but it’s taken a hold on me. I’ve tried dressing up in lab coats and doctor’s scrubs but it doesn’t have the same proletarian thrill.

It’s affecting my life. I leave parties early so I can dress as a builder and drink strong tea. Yesterday I had all kinds of important things to do but I invented a trip to a Welsh concrete factory just to feel the comforting embrace of a fluorescent orange coat.

I’m in danger of losing my job but I can’t stop wearing the outfit and fantasising about being a self-employed contractor called ‘Mike’ who specialises in discouraging quotes for kitchen extensions. Can you help?

Donna replies: Your growing obsession with workwear stems from some area of your life where you feel inadequate. Perhaps you’re out of your depth at work, perhaps your marriage is in trouble, or perhaps you’ve realised your entire life is a disaster.

Dressing as a builder makes you feel life is simple, with nothing to worry about except when the bricks will arrive and guessing the pop year on Radio Solent.

If you’re as terrible at your job as you say you are, what have you got to lose? Indulge your fascination with the construction lifestyle. Get a dirty white van that no tools are kept in overnight. Wear jeans spattered in cement.

As you’re already a compulsive liar with a track record of unrealised construction projects, it sounds like you’re perfect for the job. Live your dream and make everyone happier. 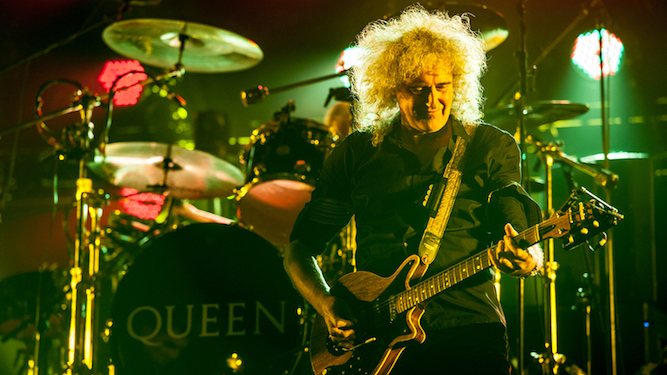 FROM Bohemian Rhapsody to Stairway to Heaven, the world of classic rock is littered with self-indulgent, pompous crap. Here are some examples.

‘There’s a lady who’s sure all that glitters is gold/ And she’s buying a stairway to heaven’ – two lines in and it’s already mumbo jumbo. And of course there’s the obligatory self-indulgent guitar solo. It was 1971 and there were a lot of drugs kicking around, but that’s still no excuse for the Zep’s mystical fairy bollocks.

Pseudo-operatic twaddle you’ll lose nearly six minutes of your life to, which at least gives you time to try – and fail – to work out what the f**k they’re on about. Spawned a godawful Queen film in 2018. And without this early hit, we may never been blessed with later masterpieces like Fat Bottomed Girls and One Vision.

Features possibly the most famously overblown guitar solo in history, drawling vocals and repetitive lyrics. We got the message ‘This bird you cannot change’ the first time round, thanks. Belongs right at the top of rock’s steaming pile of historical pomposity.

Anything even remotely related to country music needs strangling at birth, and this tedious, incomprehensible dirge is no exception. No one has ever had a clue what it’s about, especially the line about the ‘warm smell of fajitas’ or something. Although if it’s the Eagles, you can safely assume it’s drugs.

Metallica: Nothing Else Matters

Heavy metal and heartstring-tugging introspective ballads are as advisable a mix as Prince Andrew and your teenage daughter’s birthday party. Lyrics about being honest with your inner self and expressing your deepest feelings barked out with a voice like Brian Blessed with laryngitis is a combination best avoided.

Not a terrible tune, it’s the ridiculous video which is the dealbreaker here. Axl Rose marrying a sexily-dressed, generic ‘hot babe’ model in church is laughable enough, but Slash belting out a squealy guitar solo in the middle of a prairie is extra-mature heavy metal cheese. Somebody should have pointed out the need for an amp for authenticity, but it was probably already beyond salvation.