Death is sad blah blah blah but move on for f**k's sake: A letter from your local Tory MP

I know you are a sentimental fool who feels sad your nan died of Covid and angry that Boris was at a party while it happened, but it was two years ago, so man up and get over it.

We claim to be the party that is tough on crime, but it’s important that you understand we only mean some crime, and certainly not crime that that happened way back in 2020, and definitely not crime committed by the prime minister.

Boris has an important job to do, which means we have to allow him to f**k up with the little things so he can concentrate on the big things. I know you don’t think attending a party after explicitly banning them was a small thing, but that’s why we’re politicians and you aren’t, you pleb.

Getting upset about people who died in the recent past just isn’t worth it. It won’t bring your elderly relative back. And we don’t really want them back anyway, do we? Old people live miserable lives under Conservative rule, don’t pay tax and are a drain on the NHS so it’s the kindest thing for everyone that they’re dead. See, I can do compassion.

So let’s pull our socks up, put our best foot forward and forget all this silly, frivolous nonsense about parties. We’re fighting a war, you know. There’s a cost of living crisis, in case you hadn’t noticed. Our time would be much better spent doing f**k all about those things instead.

PS. You’re bloody lucky to get a reply at all.

PPS. Vote for me at the next election or Labour will steal your children and turn them into non-binary Marxist eco-terrorists.

The confused person's guide to who - or what - Michael Fabricant is 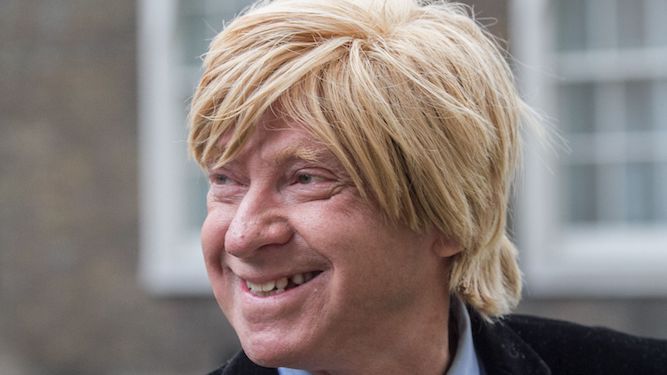 MICHAEL Fabricant is in hot water after suggesting nurses and teachers would have drinks at work during the pandemic. If you’re only dimly aware of this strange Tory MP, here are all your questions answered.

What the f**k is wrong with his hair?

Yes, let’s deal with this elephant in the room right away. Fabricant’s strange, yellow, Lego person hair initially looks like a wig. But who’d stay in business making wigs like that? Fabricant has said he’s had an ‘enhancement of the follicular area’, so it appears to be some desperate hair loss procedure, possibly involving having a Flat Eric grafted onto his scalp.

So what’s this nurses row about?

Fabricant has recently turned into a staunch defender of Boris Johnson, like Nadine Dorries but fractionally less batshit. He claimed that during lockdown exhausted teachers and nurses were ‘going back to the staff room and having a quiet drink before they went home’. However, teachers and nurses said this was bollocks.

Some probably had a drink after work, which is similar.

No doubt. But that’s not the bullshit picture Fabricant paints. And it’s an insult to compare nurses with Johnson, whose ‘job’ usually consists of dressing up as someone in construction, apparently to impress voters who literally can’t tell what’s real and isn’t, and must live in fear of Cyberman invasions.

What are his achievements?

● Saying he couldn’t appear on TV with liberal journalist Yasmin Alibhai-Brown without ‘punching her in the throat’. Pretty normal thing to say about a 72-year-old woman.

● Calling a teenage female constituent a ‘complete twat’ for questioning his work as an MP. You can guess who was probably in the right here.

● Sharing a tweet of Muslim Sadiq Khan engaged in a sex act with a pig. Apparently he was ‘distracted’. Funny, isn’t it, how people who send prejudiced shit on Twitter never look at the screen properly on a text and image-based app?

Is there an element of homophobia in criticism of Fabricant?

Unlikely as critics tend to focus on him talking rubbish and looking weird. He’s actually bisexual, so both chaps and ladies stand a chance of running their fingers through his hair. If that’s possible without getting your hand trapped.

How did he get to be an MP?

F**k knows. There seems to be a tradition of constituency parties, especially Conservative, selecting people normal society would consider to be worrying oddballs. Then everyone else only discovers their true weirdness later on. Thus it was with Fabricant, a keen Brexiter whose in-depth rebuttal of the economic risks was ‘bollocks’.

Brexiter, you say? He sounds like a ‘bit of a character’ who knobheads like me love voting for. He’s got my vote.